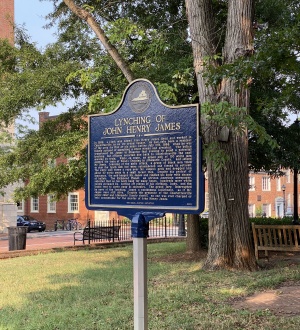 John Henry James was an African-American man lynched in Albemarle County on July 12, 1898. His murder was memorialized with the unveiling of a historic marker in Court Square on the same day in 2019. [1] [2]

The lynching occurred after James was accused of raping a white woman, Julia Hotopp. Ms. Hotopp's account alleged that had ridden into town between eight and nine o'clock to have her horse shod. Upon returning, she noticed that the gate, normally latched, was instead bound with wire. She freed the gate, but as she turned to remount her horse, "someone approached her from behind and struck her, and then grasped her by the neck, forcing her to the ground, when she became unconscious."[3]

Julia Hotopp described her attacker as "a very black man, heavy-set, slight mustache, [who] wore dark clothes, and his toes were sticking out of his shoes." Word quickly spread of the incident and the newspaper report suggests that an angry mob formed. "When the fact became known in the city, the indignation was exceedingly great, and great numbers set out in pursuit of the dastard, some on horses, on vehicles, on wheels, and afoot."[3]

John Henry James, was arrested at Dudley's barroom on East Main Street. According to the paper, he "answer[ed] somewhat the description of Miss Hotopp's assailant."[3] . Following his arrest, James was brought to Pen Park, where Ms. Hotopp identified him, and his shoes were matched to footprints in the mud at the gate.[4]

James was scheduled to be held in the Charlottesville Jail, but gathering angry crowds prompted a request to have him moved to Staunton, VA for the night. The next morning, as he was returning by train to Charlottesville, a mob approached the train at a scheduled stop at Wood's Crossing (approximately 4 miles from Charlottesville). The mob dragged James to a nearby tree, and hung him.[5]