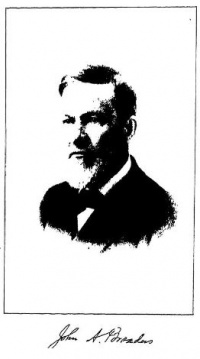 John Albert Broadus (1827–1895) was pastor of Charlottesville Baptist Church and co-founder of Albemarle Female Institute. Professor at the Southern Baptist Theological Seminary, considered one of the most famous preachers of his day.

Born on January 24, 1827 in Culpeper County, Virginia. Educated at home and at a private school, he taught in a small school before completing his undergraduate studies at the University of Virginia. Broadus was ordained in 1850 and became pastor of the Charlottesville Baptist church (now First Baptist Church) in Charlottesville.

Dr. Broadus preached his farewell sermon to the Charlottesville Church on August 28, 1859. He gave the following summary of his work since September 1851:

Listed as colored people among those Baptized by Elder Broadus on the "Lord’s day" of October 5, 1851, was Isabella belonging to Jane West. (Jane Isaacs West was one of the seven children of Nancy West, a free woman of color.)

During the American Civil War, Broadus served as a Confederate chaplain to Robert E. Lee's army in Northern Virginia.

Author of several books. His commentary on the Gospel of Matthew is considered by many to be among the best.