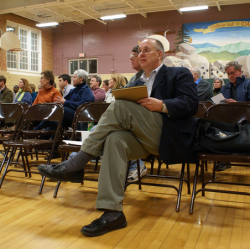 Jim Tolbert is a former Director of the City's Department of Neighborhood Development Services (1999 to 2015). Tolbert left his position in February 2015 to take a position as Assistant City Manager for Planning and Neighborhood Services of Sandy Springs, Georgia. [1] He also served as an adjunct professor at the University of Virginia’s School of Architecture, Department of Urban and Regional Planning.

Prior to his role with the City of Charlottesville, Tolbert worked in the planning and development for the cities of Albany, Ga.; Columbus, Ga.; Myrtle Beach, S.C.; Gatlinburg, Tenn. and Opelika, Ala. He was previously a director of the Albany Dougherty Planning Commission and served as City Administrator for LaFayette, Ala. The Virginia Planning Association awards include: 2005 Implementation Award, 2007 Innovation Award and in 2014 Outstanding Plan Award.[2]

Tolbert was born in Opelika, Alabama and moved to Columbus, Georgia, when he was 14.

He moved to Charlottesville in 1999 to become director of NDS. Prior to that, he worked a similar position in Albany, Georgia. He was introduced to City Council on August 2, 1999. [3].

Tolbert got a Bachelor of Science in Community Planning and Development from Columbus College and picked up a Master of Community Planning from Auburn University. [1] He is a member of the American Institute of Certified Planners (AICP).

He is a fan of the band Widespread Panic. [citation needed]