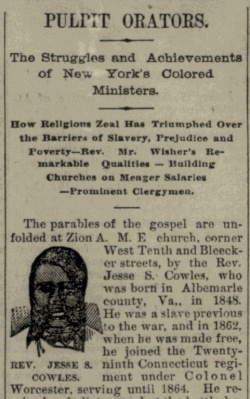 Jesse Sumner Cowles (c. 1845-1897) fought for the United States during the Civil War with the United States Colored Troops. Cowles was profiled by the University of Virginia's John L. Nau III Center for Civil War History in 2017, as part of their "Black Virginians in Blue" digital project.

Jesse Sumner Cowles was born around 1845 to Sarah and Montgomery Cowles in Albemarle County. Cowles was enslaved in eastern Virginia before the Civil War. When the Union army marched up the Virginia Peninsula toward Richmond in the summer of 1862, Cowles emancipated himself from enslavement and fled to Union lines, becoming part of a mass wartime exodus of fugitive slaves to the Union army. His family continued to live in the Williamsburg area during and after the war.[1] His service record describes him as 5 feet, 5 1/2 inches tall, with black hair, black eyes, and dark complexion.[1]