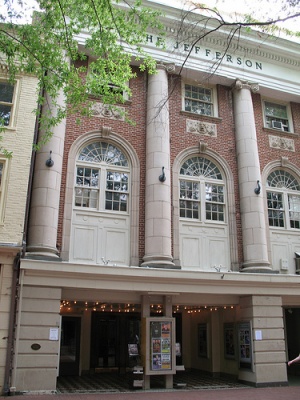 The Jefferson Theater, located on the Downtown Mall, is Charlottesville's oldest theater.

The building that now houses the Jefferson Theater was originally built in 1901 as a bank.[1] It was then sold and reopened in 1912 as a "live performance theater that played host to silent movies, vaudeville acts and a historic list of live performers, ranging from Harry Houdini to The Three  Stooges." [2]

The theater was damaged in a fire in 1915 and renovated by C. K. Howell, the architect who also designed the architecture of the Empire and National theaters in Richmond. [1]

In 1935, there was a plan for the Dominion Theaters to take over both the Lafayette and the Jefferson Theater. At that time, Dominion operated all of the Paramount theaters in Virginia. [4]

In 1969, a group of local businessmen purchased the building and re-named it the Cinema Theater and by the late 1970s it had acquired a reputation for showing so many x-rated films that locals nicknamed it "the Skinema." [1]

In 1983, owner Alton Martin sealed off the mezzanine to create the upstairs theater, renamed it the "Movie Palace," and began showing second-run films. [1] Martin passed away and Hawes Spencer purchased the building in 1992. [1]

The building's most recent renovations were begun after its June 2006 closing. It was the result of a purchase by Coran Capshaw.[5]

The architectural style of the both the interior and the exterior of the Jefferson Theater are Adam-style Classicism, known for classical Roman decorative motifs. [1]

Since the 2009 remodeling, the Jefferson Theater has been equipped with state-of-the-art sound and lighting systems, new restrooms, a restored balcony, and two full-service bars. [2]