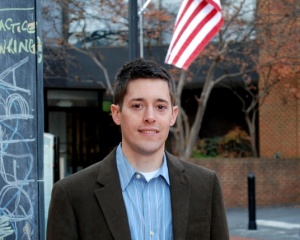 Jason Vandever was elected as treasurer for the City of Charlottesville in a special election on April 2, 2013. [1]

Since 2008, Vandever served as chief deputy treasure but took over the positon of interim treasurer on October 1, 2012 when Jennifer J. Brown retired. Vandever has been chief deputy since 2008 and is Charlottesville Native. He graduated from Charlottesville High School and James Madison University.[2]

Judge Edward L. Hogshire had to decide whether the appointment can stand until the November 2013 general election or if a special election will be held.

On October 15, 2012, City Council voted to support carrying over Vandever's appointment. Members of the Jefferson Area Tea Party requested a special election be held at a cost of up to $35,000 [3] Judge Edward Hogshire ruled that a special election was to be held on April 2, 2013 to decide Brown's replacement. [4] Vandever defeated independent John Pfaltz by 1,280 votes to 397. [1]