From Cvillepedia
(Redirected from James Brown)
Jump to: navigation, search 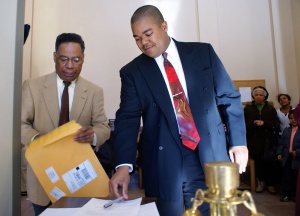 James E. Brown after being sworn in as Charlottesville's sheriff

James E. Brown, III was elected as the Charlottesville City Sheriff on November 3, 2009 and sworn in on December 23, 2009. Brown has worked in the community for over fifteen years[1].

Brown received an Advanced Studies Diploma from Charlottesville High School in 1988. He went on to receive a B.A. in Sociology (Pre-Law concentration) from Longwood College in 1992. He has worked as a Pretrial Investigator/Case Manager and Probation Officer with Offender Aid & Restoration (OAR) for over 7 years.