From Cvillepedia
(Redirected from Jackson Park)
Jump to: navigation, search 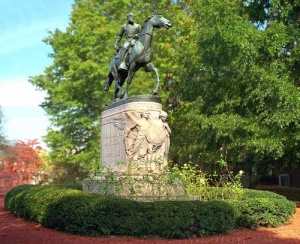 A large equestrian monument of Thomas Jonathan "Stonewall" Jackson mounted on his horse Little Sorrel, by sculptor Charles Keck (1875-1951), is the focal point of the park.

Court Square Park, formerly known as Justice Park, formerly known as Jackson Park, is a public park located north of the Downtown Mall. The park consists of 0.4 acres and includes all of the property bordered by Jefferson Street, Fourth Street N.E., High Street and the Albemarle County Court Building. Paul Goodloe McIntire established the park in 1919 by donating the land to the city of Charlottesville.

The focal point of the park is a Monumental Figurative Outdoor Sculpture by a member the National Sculpture Society, Charles Keck (1875-1951), donated by Paul Goodloe McIntire to the City of Charlottesville during the late The City Beautiful Movement from 1919-1924. The statue is listed on the National Register of Historic Places.[1] The subject of the statue is Thomas Jonathan "Stonewall" Jackson mounted on his horse Little Sorrel. The park once contains well-maintained flower beds and a number of benches.

The Thomas Jonathan Jackson Sculpture by Charles Keck portrays a ‘’heroic-sized’’ Jackson riding into battle on his horse, Little Sorrel, in bronze. Kech designed an elaborate oval pedestal of pink granite with the allegorical feature of Faith and Valor carved in high relief on the front as a special tribute to the revered Confederate general.

Paul Goodloe McIntire gave Court Square Park, a formal landscaped square adjacent the Albemarle County Courthouse and bound by High, Fourth, and Jefferson Streets, for the display of the artwork. The sculpture was presented to the city of Charlottesville on October 19, 1924.

History of park and statue donation

The park's land was originally known as the McKee Row.[2] The buildings on the property were torn down in 1918 and a school for white children was supposed to be built in their place.[2]

That did not happen. Instead, philanthropist Paul Goodloe McIntire purchased bought the land to donate to the city specifically to display a sculpture representing General Jackson.[3][4] McIntire's deed requires that the land "will never be used other than for a park and that no other monument except Jackson’s would ever occupy it.”[3] McIntire himself had chosen the site and position of the statue, rejecting a suggestion that it face north rather than south.[3] A 1966 proposal to move the statue to one corner of the park was defeated, because "to be shown to best advantage the statue should remain in the open and elevated position it now occupies.”[3]

Sculptor Charles Keck designed the work, using McIntire's favorite mount as the model for Jackson’s horse Little Sorrel, the horse Jackson was riding when mortally wounded. The granite pedestal was finished two years in advance of the statue, due to World War I bronze shortages.[3] On first viewing, the finished work installed in the park in 1922, the sculptor called it "the best work I have ever done.”[3] Keck’s sculpture of Jackson is now ranked as one of the three best equestrian statues in the world.[5]

The landscaped area around the base, including park benches and a brick terrace, were originally the result of private philanthropic donations in the late 1960's by Mary Frazier Cash and an organization called Friends of the Charlottesville Statues. In 1973 the Charlottesville Civic League and then Mayor Francis Fife in turn dedicated a memorial in Jackson Park in gratitude to Ms. Cash, who had died in 1971.[6]

At the 2012 Virginia Festival of the Book, City Councilor Kristin Szakos raised questions over whether Confederate statues should be removed out of a concern they celebrate the state's Confederate past.[7] The proposal was met with considerable backlash from the community, who view the statues as an important part of history.[8][9]

More recently, in March 2016 the issue of moving Confederate statues was revived.[10][11]

On July 8, 2017, a chapter of the Ku Klux Klan from North Carolina held a permit in the park that prompted a protest by over 1,000 area residents. After the KKK was dispersed, the Virginia State Police fired three tear gas canisters into the crowd as a way to get them to disperse. This action has been fiercely disputed by citizens who believe the police went too far.[12] Over 50 people asked to address Council on the issue and many asked its members to call upon the police to stop using military-grade weapons and tactics against civilians.[13]

City Manager Maurice Jones addressed concerns in a statement read from the dais at the July 17 Council meeting.[14]