John "Jack" Jouett (December 7, 1754 - March 7, 1822) is referred to as the Paul Revere of the South. Jack was born to tavernkeeper John Jouett Sr. and his wife, Mourning Harris. The elder Jouett held a license to operate the Swan "ordinary" (tavern) in Charlottesville. During the Revolutionary War, Jack served as captain in the state militia and at became famous for his “all night ride” in 1781.

On June 3, (six years after Revere’s ride), 26-year-old John “Jack” Jouett made a dangerous 40-mile dash, (on his bay mare Sally), from Cuckoo Tavern in Louisa County to Swan's Tavern to warn Virginia legislators meeting in Charlottesville of approaching British forces on the way to capture the Founding Father. The British had been threatening Richmond and central Virginia since the spring, and the General Assembly had fled to Charlottesville. Among those who escaped were Thomas Jefferson, Patrick Henry, Benjamin Harrison, John Tyler and Richard Henry Lee. The young Daniel Boone was one of seven captured and briefly detained.

In 1779 Charlottesville is described as having a "courthouse, one tavern, and about a dozen houses." The tavern was the Swan Tavern owned by Jack's father - John Jouett, Sr. who kept the Swan until his death in 1802. Jack's grandfather, Matthew Jouett (1681-1745) owned the Cuckoo Tavern, which got its name for the cuckoo clock which hung on its walls. This was supposedly the first cuckoo clock brought to Virginia. 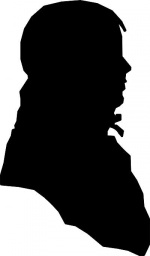 John "Jack" Jouett, Jr. (December 7, 1754 – March 1, 1822) was a politician and a hero of the American Revolution, known as the "Paul Revere of the South" for his late-night ride to warn Thomas Jefferson, then the Governor of Virginia, and the Virginia legislature, temporarily located in Charlottesville, of coming British cavalry who had been sent to capture them.

The Community History Series, produced by the Jefferson Cable Corporation, ran into 1974. This episode features Bernard Chamberlain discussing the final year of the Revolutionary War and Jack Jouett's ride.