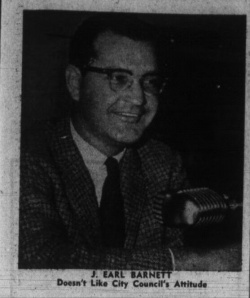 J. Earl Barnett was a challenger in the 1962 Democratic primary for Charlottesville City Council. At the time he was a 36-year old city native making his first run for office. He told WINA in a March 28 broadcast that he felt Council did not listen to citizens and that an African-American should be appointed to the Charlottesville School Board. [1]

Barnett was a general contractor who graduated from Lane High School and the University of Virginia. He was a member and president of the Falcon Club.