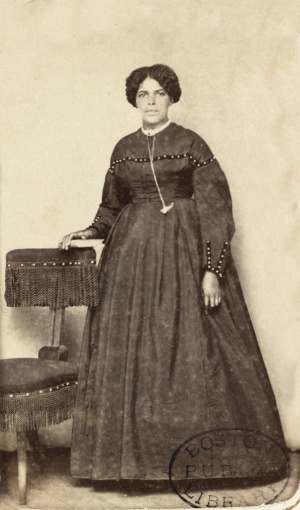 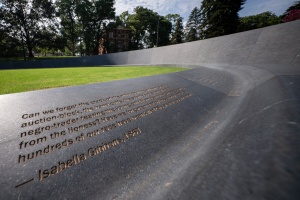 Isabella Gibbons (d. February 3, 1890) was one of the first teachers at the Jefferson School. She was born enslaved during the 1830s and learned to read and write despite Virginia's laws that made it extremely difficult for enslaved people to do so. Isabella and her husband William Gibbons remained married slaves owned by University of Virginia families until their emancipation on Liberation and Freedom Day. After emancipation, Isabella graduated from and taught at the original Jefferson School and William founded a church in Washington D.C.

Isabella Gibbons’ birthday, birthplace, and parents remain unknown. Gibbons and her son, John West, were probably owned by Jane West, a milliner who was a free woman of color residing in downtown Charlottesville. [2]Isabella may have been hired out to Professor William Barton Rogers at the University of Virginia when John was a toddler.[3] Rogers eventually purchased her, and she lived at the University of Virginia, where she met her husband William, who was also enslaved by UVA professors. They married early in the 1850s, although their marriage was not recognized by law.

It is likely that it was during her enslavement by Rogers that she learned to read and write. It is possible that Professor Rogers’ wife taught Gibbons, although it is also said by Bella Gibbons that her parents taught themselves how to read and write using discarded books and listening to lessons. At the time, it was illegal for anyone to teach an enslaved person literacy, in order to restrict as much power and knowledge as possible.

Professor Francis Smith, Rogers’ successor, later purchased her. Her son, John West stayed with and was reared by Jane West, at that time a childless widow for more than fifteen years.[4] Isabella Gibbons ensured that their children also learned to read. Isabella and her children by her husband William Gibbons were listed with Smith in the 1860 slave census.

Gibbons was known for being the “general reader” for illiterate Black people at the University. Colleague Anna Gardner said that “she has read to one colored man who has paid for a newspaper for the past four years, though he cannot read a word himself. He is exceedingly well-informed with regards to the events of the war.”[5] Gibbons opened a “pay school” for freedmen before emancipation. When Anna Gardner arrived to open a freedmen’s school, a white woman told Gibbons that she “would lose all her scholars.” Gibbons retorted that not only would she send her children to Gardner’s school, but that she was going to attend herself. Gibbons was part of the first graduating class of the Jefferson School and became a member of the staff. Each teacher named their classroom, which was in turn called a “school.” Gibbons named her “school” the Major Savage School, after the Union soldier brother of Elizabeth Savage Rogers.[5]

Gibbons frequently wrote to and was published in the Freedmen’s Record, the journal published by the New England Freedmen’s Aid Society (NEFAS), who paid her salary when she taught at the Jefferson School.[5] Her most famous quote is engraved as follows on the Memorial to Enslaved Laborers at the University of Virginia:

“Can we forget the crack of the whip, cowhide, whipping-post, the auction-block, the hand-cuffs, the spaniels, the iron collar, the negro-trader tearing the young child from its mother’s breast as a whelp from the lioness? Have we forgotten that by those horrible cruelties, hundreds of our race have been killed? No, we have not, nor ever will.”[1]

In 2015, the University of Virginia named its newest dormitory Gibbons House in recognition of the accomplishments of Isabella Gibbons and William Gibbons. [6] The idea was a recommendation from the President's Commission on Slavery and the University.