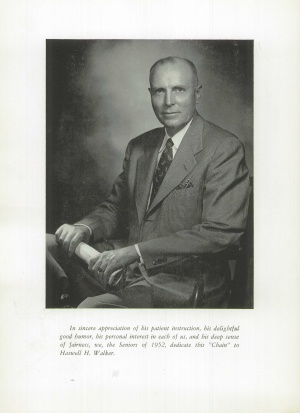 Haswell Hunter Walker (1896-1992) was an educator in City schools for 42 years. Walker was born in Saluda, Middlesex County, Virginia. Walker started at Midway High in 1924 teaching Mathematics and Bible, was principal for three years from 1925-1928, then taught Mathematics there until 1966 (Midway High was renamed to Lane High in 1925). Walker Junior High School was named for him in the same year he retired, then later renamed Walker Upper Elementary School after a reconfiguration of the schools.

During Walker's first year teaching at Midway, The Daily Progress published this about him Oct. 2, 1924:

Mr. Walker is using unusually good methods in his Geometry classes. He has pupils to[sic] construct every figure about which they are studying before the proof is taken up. Getting pupils to do things and see things ensures clear understanding. Teachers sometimes forget that pupils have eyes and muscles as well as ears. Knowledge comes through the use of more than one sense.

During desegregation of Charlottesville schools in 1958-1959, Walker was an informal advisor to the Parents' Committee for Emergency Schooling (PCES), a group formed to counter the segregationist Charlottesville Education Foundation (CEF). In The Moderate's Dilemma, Andrew B. Lewis writes that Walker "tipped off the mothers to a secret meeting the CEF was holding with the Lane teachers in hopes of securing their participation in the segregationist initiative before the PCES had a chance to speak with them" and thereby allowed the the PCES to prevail against the CEF, preventing a more prolonged segregation of the schools.[1]