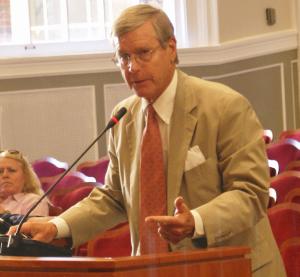 H. Carter Myers III is the owner of several car dealerships in Albemarle County and a former member of the Commonwealth Transportation Board. Myers is an opponent of grade separated interchanges on U.S. 29. In 1993, he was the Republican candidate for the Samuel Miller Seat on the Board of Supervisors but was defeated by write-in candidate Sally Thomas.

Myers is the grandson of the founder of the Carter Myers Automotive Group, which was founded in 1902 as a hardware store in Petersburg. Myers graduated from the University of Virginia's McIntire School of Commerce in 1965 and became president of the company in 1974. Myers was president of the Virginia Automotive Dealers Association (VADA) President in 1995 and served as chair of the National Automobile Dealers Association (NADA) in 2002[1].

Myers co-founded the Thomas Jefferson Partnership for Economic Development, served on the advisory board of the University of Virginia Children's Medical Center, and served on the executive committee of the Virginia Chamber of Commerce.[2]

1993 election for Board of Supervisors