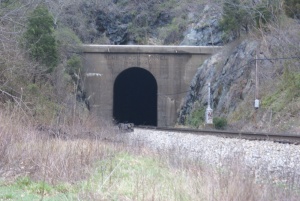 One entrance of the Blue Ridge Tunnel

The Greenwood-Afton Rural Historic District covers 16,200 acres in northwestern Albemarle County and incorporates a small area of northeastern Nelson County and southeastern Augusta County. It was added to the Virginia Landmarks Register on December 16, 2010 and the National Register of Historic Places on May 6, 2011. [1]

A number of historic villages are located within the area, including Yancey Mills, Afton, Greenwood and the historically African-American enclaves of Newtown and Freetown. Within its proposed boundaries are a number of properties that are already listed on the National Register of Historic Places, including Blue Ridge Farm, Casa Maria, The Cedars, Emmanuel Episcopal Church, Mirador, Piedmont, Ramsay, Seven Oaks, Swannanoa and Wavertree Hall/Bellevue. A total of 583 properties have been documented in the district, which also includes the historic Blue Ridge Tunnel.[2]

"Covering approximately 16,200 acres in western Albemarle County and a small corner of Nelson and southeastern Augusta counties, the Greenwood-Afton Rural Historic District was first settled by Europeans with the arrival of 18th-century Scots-Irish immigrants from the Shenandoah Valley. Early settlement developed along wagon roads and turnpikes that passed through gaps in the Blue Ridge Mountains. During the second-quarter of the 19th century, French-born military engineer Claudius Crozet, known as the “Pathfinder of the Blue Ridge,” directed the building of four railroads tunnels through the mountains, including one that was the longest in the U.S. when it opened in 1858. The advent of rail transport dramatically boosted agriculture and trade in the Greenwood-Afton district, giving rise to one of Virginia’s most successful early commercial orchard industries. Today the Greenwood-Afton Rural Historic District is dominated by large farmsteads, the Blue Ridge Parkway, and early-20th-century estates. It also includes the mid-19th-century villages of Greenwood Depot and Afton, as well as the early-20th-century historically African American communities of New Town and Free Town. Greenwood’s legacy as a seasonal playground for the wealthy is reflected in the area’s large number of estates and “Country Houses” designed by prominent architects."