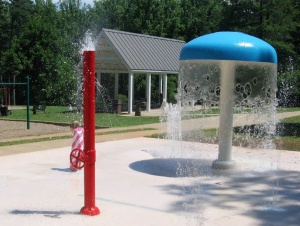 Greenleaf Park was originally part of McIntire Park until it was separated by Route 250.[1] The park features a playground area, including equipment for children ages 2-5 years old, a picnic shelter, seasonal restrooms, and a half-basketball court, a touch sensitive spray ground featuring a mushroom fountain and an interactive water pole, and a wide soft surface trail.[1] The sprayground opened in 2013 and is open from May to October each year. [2]

A plan was recommended to City Council in early January 1959 by city manager James E. Bowen. The plans were developed by the city engineer Thompson A. Dyke. The city's Recreation Advisory Board endorsed the plan in late 1958. [3] City Council approved the idea on January 5, 1959 and a cost estimate was prepared. [4]