George Wythe Olivier (1842 – 1923) was an elected at-large (citywide) mayor of Charlottesville in the early 20th century. 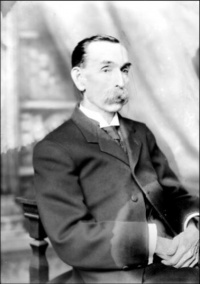 George Wythe Olivier was directly elected by citizens of the city to the office mayor. He served from September 1, 1904 to August 31, 1908. George was father of the future meteor scientist Charles Pollard Olivier (1884 – 1975).

A year before George's son was born, the university dedicated the Leander McCormick Observatory and its 26‐in. Alvan Clark refractor.

George Wythe and Katharine Roy (née Pollard) Olivier (1848-1910), owned the University Book Store, purchased with the proceeds of her family estate, and operated a boarding house in their home. Katharine had been raised in the surrounding Albemarle County, and the couple knew most of the university faculty well.[1]

Kate and George Olivier met in Petersburg and married on May 29, 1880, in Baltimore Maryland. In 1881, they built a large brick house at 1021 West Main Street, just outside of the University of Virginia’s main gate. The building was designed with rental apartments for University faculty and visitors to the area. George was also freight agent for Adams Express at the University railway station and operated a college bookstore. In 1883, they joined the Christ (Episcopal) Church; George was elected the Church’s Vestry. In 1884, their son, Charles Pollard Olivier was born followed by their daughter, Katharine Roy on March 14, 1887. According to the 1900 census, the Olivier household employed a 76-year-old African American women. Kate and George knew many of the university professors, including Charles Scott Venable. Several of Kate’s female relatives were married to University instructors and professors. Kate was active in the Daughters of the Confederacy and Confederacy memorial organization. She was elected Secretary of the Daughters’ Albemarle Chapter in 1908 and President shortly before her death on December 25, 1910.