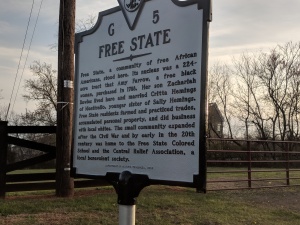 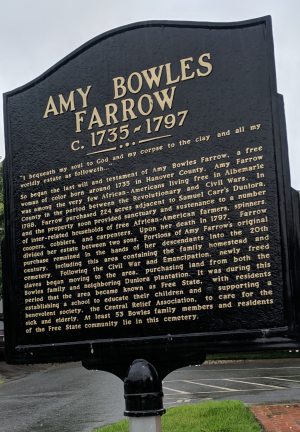 Amy Bowles Farrow was born around 1735 as an illegitimate child of an interracial union. Her mother was a white indentured servant, and thus Bowles-Farrow was required by Virginia law to be an indentured servant for her first 31 years. Further proof of her indenture is from her daughter Jane’s lawsuit against the Michie family in Louisa County for violating her indenture contract.[1] Jane won her lawsuit in 1779 against the Michie estate and was set free from her indentured servitude in 1779.[1] Bowles-Farrow was free before 1779. She moved from Hanover County to Albemarle and married Thomas Farrow, who was also a free person of color. In 1788, she purchased a tract of 224 acres of land that would become Free State. Her son Zachariah, who worked at Thomas Jefferson’s plantation, Monticello, married Critta Hemings, the sister of Sally Hemings, who was enslaved at Monticello.[1][2]

Amy Farrow's will divided her property between her two sons, Thomas Farrow, Jr. and Zachariah Bowles.[3] Half of their property left their family by 1850, and was completely surrounded by the Dunlora plantation. This part was passed by Zachariah Bowles to his nephews, Stephen and Peter Bowles. The part owned by Stephen Bowles eventually passed out of the family in 1916, though one heir to Peter Bowles held land originally purchased by Amy Farrow into the 21st century.[2] Peter Bowles' heirs still live on at least six acres of land in Free State.[4]

After the Civil War, Free State became both a stopping point and a destination during the post-emancipation Great Migration.[1] People emancipated from enslavement moved into the area, purchasing land from both the Bowles family and the Dunlora plantation. By the late 1920s, white landowners began to acquire Free State lands, with some introducing racial covenants prohibiting sale or rental to African Americans.[2] 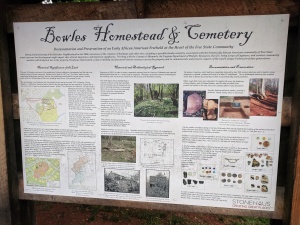 Archaeological, documentary, and oral history research was done beginning in 2004 to secure a rezoning request from the County of Albemarle and federal permits from the U.S. Army Corps of Engineers.[2] Most of the structures in Free State were wooden or shingled and frame-built. Six were excavated in the research process. [1] This research is summarized on a sign in front of the Bowles family cemetery, which contains the remains of at least 53 people, though only the gravestone of Mary Bowles remains.[2] Stones were placed in the Brown family cemetery for each of those buried at Dunlora.[1]

Many of the streets in the Belvedere neighborhood are named after the families of the residents of Free State. According to Dr. Angela Anderson and her family's oral history:

Farrow Drive and Farrow Hill Court are named after Amy Bowles-Farrow (spellings vary) and her family. Bowles-Farrow bought the original 224 acres of Free State from the Carr family.

Phillips Street could be named after Phillip Brown (uncle of Dr. Anderson), one of the last descendants of Amy Bowles-Farrow who lived on Free State.

Daisy Lane is potentially named after the daughter of Hunter and Susie Brown, longtime Free State residents and descendants of Amy Bowles-Farrow, who died in infancy.

Craven Alley is named after John H. Craven, who owned Park Mill. He was a resident of Pen Park plantation from 1819 until his death ca.1845. Edward Bowles, a cooper who lived on Lewis’ property, may have gained his livelihood through the production of barrels for Park Mill (later known as Cochran’s Mill) located on Meadow Creek immediately north of Rock Hill.

Colbert Street is named for Martha Colbert and her family. She was listed as living in the house in the 1830 census with Zachariah Bowles and his wife, Critta Hemings-Bowles. She may have been Critta’s great niece and the daughter of Jefferson’s butler, Burwell Colbert.

Griffen (Griffin) Grove and Butler Street are named after Griffen Butler, who married one of Amy Bowles-Farrow’s daughters, Martha. Martha “Patsy” Bowles married Griffin Butler on October 24, 1790. Martha was one of the three listed children recorded in the will of Amy Farrow’s husband, Thomas Farrow, Sr.

Battles Alley: By all appearances, Amy Farrow occupied and farmed the 224-acre property she purchased from William Johnson in 1788 until her death around 1797. County road orders from the late 18th and early 19th centuries31 further indicate that Farrow’s property was home to a number of her children and in-laws, including her sons Zachariah Bowles and Thomas Farrow, Jr., as well as Bartlett Bowles, Robert Battles, Shadrack Battles, Griffen Butler, Frank Bowles, James Bowles, and Jacob Bowles.

Addison Street: in the 1830 census, Griffen Butler’s son Addison (Butler) was listed as one of the two couples living in Reuben Cole’s household (in Free State) along with his wife Mary Martin. Addison Butler and Mary Martin were married on November 2, 1829.

Tyree Lane is named for Mary Barnett Tyree. Judith Barnett, daughter and heir of Lucy Barnett, died a few short years after her mother. Her will (ACWB 7:250), was entered in the Albemarle Court November 4, 1822. Judith Barnett requested that all of her personal property be sold and the money applied to her debts, with the remainder going to the same six children as her mother's will. Eight years later, in 1830, two of these children, Mary Barnett Tyree and Jane Barnett, sold Samuel Carr their interest in their mother’s land.

Georgianna Alley: The African-American households of William Carr, Garrett and Rachel Jones, and George and Georgeanna Terrell was recorded on the 1900 census immediately after John B. Moon. They were identified as renters and probably all were living at this time as tenants on Dunlora lands. Dunlora slave George Terrell and wife Georgeanna would purchase land in the southeastern corner of Free State in 1902 from John B. Moon.

Shelton Street is named for George and Georgeanna Terrell’s son, Shelton Terrell, who lived nearby as of the 1900 census, possibly on the parcel his father would purchase in 1902 from John B. Moon.

Cornelius Alley: The last clear indication of William Johnson and wife, Elizabeth, is their 1796 sale of the remainder of their Belvedere ridge property to Cornelius Schenk and Peter Lott. In 1794, a William Johnson in Albemarle County mortgaged an individual he enslaved and various livestock to secure a debt with Cornelius Schenk and Peter Lott, well-known Charlottesville merchants.

Cole Street, Spears Alley, and Winn Alley are each named after families who were longtime members of the Free State community.[5]

“Dr. Angela Anderson has done extensive research on the areas of Free State, Belvedere, and Dunlora, Virginia. Her family traces back to these original communities and she is currently documenting her findings for an upcoming book. She will share personal stories about the lives of the residents in these communities and will welcome any questions or interests you might have. Dr. Anderson holds a Ph.D. in Organization and Management and teaches several Leadership and Aerospace courses at Ashford University in Colorado and Southeastern Oklahoma State University in Oklahoma.”[6] Dr. Anderson’s lecture was filmed on May 26, 2021 from the Center at Belvedere.