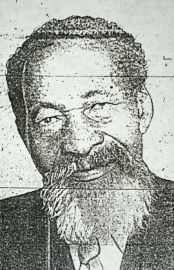 Fountain Hughes (ca. 1860–1957) was a Charlottesville resident once enslaved at Hydraulic Mills by the Burnley family. Hughes, a direct descendant of Sally Hemings, was a farmer, gardener, and driver. He was interviewed by the Library of Congress as part of the Federal Writers' Project in 1949.[1]

Fountain Hughes was born in Charlottesville around 1860. He was a descendant of Wormley Hughes, who was a member of one of the families enslaved by Thomas Jefferson at Monticello for multiple generations.[2]

Hughes’ father was killed in the Civil War after he was impressed into Confederate service. His mother, with no other source of income, “rented [Hughes] out” to neighboring white families for one dollar per month.[1] Hughes’ grandfather and other family members were among the people sold in Monticello's 1827 “dispersal sale” after Jefferson’s death.[1][2]

In the early 1880s he purchased horses and a carriage and worked as a hack driver, but left soon after to Baltimore, Maryland, where there were more opportunities for Black men. There he worked for several decades for the Shirley family as a farmer and gardener.[1]

Hermond Norwood's 1949 interview with Fountain Hughes is one of the few surviving sound recordings of former slaves. He had vivid memories of slavery in Charlottesville and of the harsh conditions for Black people during and after the Civil War.[1][3] His longevity attracted notice and led to numerous articles about him in Baltimore newspapers.[4][5] Shallie Barrett Marshall (1932-2012), in her own Getting Word interview, recalled outings to the Shirley farm to visit her great-grandfather, “Pap.”[1]