From Cvillepedia
(Redirected from Fluvanna)
Jump to: navigation, search 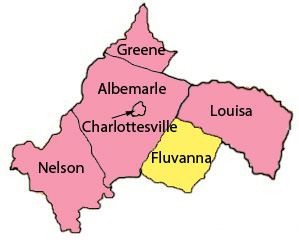 Fluvanna County is on the southeastern border of Albemarle County. The county was founded in 1777 as a subdivision of Albemarle and was named after the Fluvanna River, which was what the James River was called west of Columbia in the 18th century. The county seat is the town of Palmyra. [1]

The county is undergoing a Comprehensive Plan update in 2022. [4]

Fluvanna is a member of the Thomas Jefferson Planning District.

There is a five member Board of Supervisors. Eric Dahl is the county administrator.

2012 firing of temporary administrator, four others

After county administrator Jay Scudder resigned in November 2011, planning director Darren Coffey was appointed as interim administrator. On March 7, 2012, the Board of Supervisors announced his firing Darren Coffey as well as that of four other department heads. Coffey had given raises to dozens of county employees without the Board's permission. [5] [6] The vote was 3-2 and was panned by several former members of the Board of Supervisors. [7]

A.M. "Mel" Sheridan Jr was re-elected as Commissioner of Revenue.

Commonwealth's Attorney Jeffrey W. Haislip was unopposed for another term.

Mozell H. Booker was re-elected to represent the Fork Union District on the Board of Supervisors.

Patricia B. Eager was re-elected to represent the Palmyra District on the Board of Supervisors.

Eric B. Hess was re-elected as Sheriff.

The final workshop in a Comprehensive Plan review was held in mid-June of 2022. Further work sessions will be held this fall before adoption possibly by the end of the year. [4]

Fluvanna is seeking to expand its water supply by building a pipe from the James River. But people in the Point of Fork area are concerned it will affect a Revolutionary War battlefield and hurt their quality of life. County officials say they need to secure resources for the future. [15]

The nonprofit Fluvanna Heritage Trail Foundation is working with the county to build a series of pathways across the community. In April 2017 the group announced plans to build a 2.5 mile trail near Lake Monticello called the Crofton Trail. [16]