The Flats at West Village is a 595-bedroom mixed-used development on West Main Street. The project, once known as the Plaza on West Main, was developed by the Ambling University Development Group and Riverbend Development.[1] [2]

It is now operated by Peak Campus Development. [3] 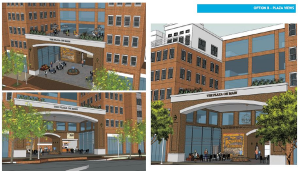 Plans were submitted to the city in the fall of 2012. [4] The Charlottesville Planning Commission got its first look that October. [5]

The Board of Architectural Review voted 4-2 in October 2012 to say that the current design would pose a risk to the West Main architectural district. [6] The Planning Commission voted 6-1 to recommend approval of the necessary special use permits in November 2012, with Lisa Green voting against. [7]

The Charlottesville City Council (2012-2013) approved a special use permit for the Plaza in a 4-1 vote on December 3, 2012, despite concerns that it would negatively impact the character of West Main Street.[8]

The Charlottesville Board of Architectural Review voted to modify portions of the building before approving the designs in 2013. The controversial modified plans included enclosing an outdoor plaza, increasing the us of HandiPanel cladding and darkening the paint scheme. [10]

Construction began in the summer of 2013 at a time when many other residential complexes were either under construction or planned. [11] [12]