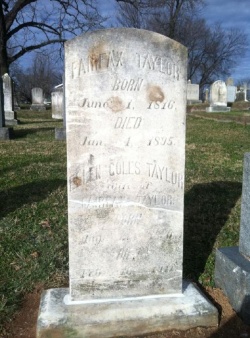 Fairfax Taylor (June 1, 1816 - January 4, 1895) was an African-American civil rights activist who lobbied for equality for newly freed black citizens after the Civil War.[1] Fairfax is the father of politician and Union soldier James T. S. Taylor.

Two weeks after the war began the Charlottesville Baptist Church "held a special session."On April 29, 1861, the church minutes noted that the leaders of the church had decided "to consider the request of the colored members in the communication from Fairfax Taylor." [2] Acting as a representative for some of the slaves and free blacks, Taylor was chosen most likely because he was his own man and because he also knew how to communicate on a level that whites respected. Taylor, "formerly a slave, freed by his own purchase could not only read and write, but also had "some knowledge of grammar." In addition, he was"well respected in the community" [3][4]

Fairfax Taylor is buried at Maplewood Cemetery next to his wife, Ellen (Coles) Taylor (August 20, 1836 - February 16, 1911). His gravesite was refurbished and rededicated in February 2013. [citation needed]