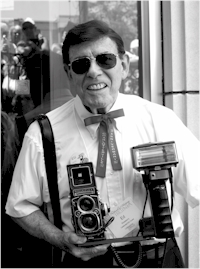 Ed Roseberry during the unearthing of the 1962 Charlottesville time capsule on May 27, 2012. (Steve Trumbull photo)

Ed Roseberry is a local freelance photographer and historian who has methodically documented several decades of life in Charlottesville and Albemarle County.

Born Edwin S. Roseberry in Roanoke, VA in 1925, Mr. Roseberry moved to the university section of Charlottesville at age 14. His interest in photography began during the Second World War, when, prior to shipping out for duty his father gave him his first camera. A graduate of the University of Virginia, Mr. Roseberry is well known for his photographs of university life at that time.

Following his return from service, Mr. Roseberry purchased his first professional camera, a twin lens reflex. His early work mainly used black and white film due to the limited light sensitivity of color film of the time. He was elected as president of the Charlottesville Camera Club in January 1960. [1]

Before becoming an independent freelance photographer, Mr. Roseberry worked for the State of Virginia. He is well known for many photographs taken from unusual locations including building tops and airplanes. Like many photographers of his time, he did his own dark room work.

Mr. Roseberry's work has been seen across the country through the Associated Press and other news agencies. In 1976, the nation's bi-centennial year, he photographed Queen Elizabeth and Prince Charles during their visit to Charlottesville. He continues to take photographs to this day.

Ed's work was called up for two CitySpace exhibits as a part of Charlottesville's 250th birthday celebration. The exhibits were designed by local photographer Steve Trumbull.

Mr. Roseberry plans to publish a book of his work. [2]