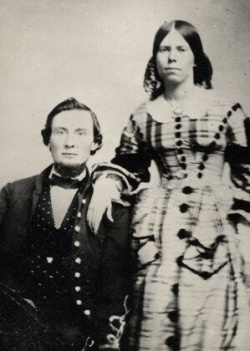 Dr. Orianna Moon (1834 – 1883) was the sole female doctor at the Charlottesville General Hospital and reportedly the first female doctor south of the Mason-Dixon Line.[1] She worked there for one year, 1861.[2]

Dr. Moon was born at Viewmont in Albemarle County on August 11, 1834. She was the daughter of Edward Harris Moon, a wealthy planter and merchant, and Anna Maria Barclay Moon. Her parents, who valued education highly, hired tutors for their daughters and sons and arranged for them to attend academically rigorous schools.[3] As a young woman she had reportedly been skeptical about or perhaps even rejected Christianity, especially when it conflicted with women's rights, which she championed throughout her life.[3][4] After returning to the South after medical school, she often remarked on the differences in how women were treated in each region. As a young doctor, she was also known for her antislavery beliefs.[3][4]

Moon graduated from the Female Medical College of Philadelphia, Pennsylvania, in 1857.[2] She was one of 38 women in the United States to earn a medical degree. She wrote her thesis on the "Mutual Relation Between Cardiac and Pulmonary Disease." Six other women were in her graduating class.[3]

Despite her antislavery beliefs, Moon was recruited to provide nursing services to the Confederacy. It is believed that she complied with the hope of becoming a surgeon. Attitudes regarding women doctors likely made establishing or maintaining a practice difficult, especially in the South. The demands of domesticity and her children, when combined with a general distrust of women doctors, limited her to nursing duties even though she had a medical degree.[3]

Moon served as the superintendent of nursing at Charlottesville General Hospital.[3] Dr. Edward Warren, the medical inspector of the Army of Northern Virginia, observed Moon working in the hospital. He described her as “‘a lady of high character and of fine intelligence’” but patronizingly believed “women should not ‘dream of entering the ranks of the medical profession.’”[2]

On July 22, 1861, one day after the First Battle of Bull Run, Dr. Moon received word to report to the Charlottesville General Hospital. The hospital was overflowing with wounded from Bull Run, spilling over into private homes nearby. Dr. Moon was assigned a "ward" in the hospital, and was awarded a surgeon’s commission as a captain in the Confederate Army, reportedly the only one given to a woman.[5]

Moon married a fellow doctor at the hospital named Dr. John Summerfield Andrews in 1861. In November of that year, the couple relocated to Richmond. Frustrated with the outrageously high barriers to practicing medicine as a woman, Moon eventually retired and became a homemaker.[2]

She died of pneumonia, a complication of her cancer, on December 26, 1883.