From Cvillepedia
(Redirected from Downtown mall)
Jump to: navigation, search 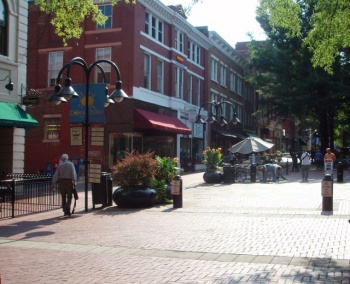 The mall was created as a way to revitalize the city's central core. City political and business leaders were concerned that the downtown area was declining due to retail developments such as the Barracks Road Shopping Center, which was growing at a much faster rate than downtown. [1]

Its origins date back to a recommendation made in late October 1959 by a subcommittee of the Chamber of Commerce. The Parking and Traffic Committee called for a study of removing pavement on East Main Street and restricting traffic to pedestrians. [2]

An organization called the Central City Commission was formed to explore ways to attract more people back downtown. The commission and City Council worked with the firm Lawrence Halprin & Associates to develop plans for what would become the mall. Council voted 2-0 to approve the plans on March 18, 1974. [3] Three members of Council had to recuse themselves because opponents of the project alleged they had a conflict of interest. [4]

There was significant initial opposition to the mall project, with it described as "a boondoggle, a $2 million mistake, [and] a gift to the ungrateful merchants of Main Street.[5]" Construction of the mall began on December 26, 1974. [6]

On several occasions including April 2003, Council has discussed whether rules could be set regarding panhandling. [7]

The City Council created the mall ambassador program at the end of 2012 as a way to provide more "eyes on the street" to deter crime on the Downtown Mall and to be a resource for tourists. The program was eliminated from the budget and it ended on June 30, 2016. [9]

The Mall was overhauled under a $7.5 million project that was subject to some debate. Wallace Roberts & Todd were commissioned to conduct a schematic design. [10]

On July 21, 2008 voted to proceed with a design being shepherded by MMM Design. The City promised that the work would be done in five months beginning in January, with the project being overseen by construction management firm Barton Malow. Block captains volunteered to help the City develop a construction schedule that minimized the impact on businesses.

Council also allocated $50,000 to help pay for marketing efforts to emphasize to the public that the mall will be open during the renovation. [11]

The original design for the mall called for 150 public seats that could be moved around. When the mall was renovated in 2009, around 30 benches with backs were installed on the Mall. Several of these around Central Place were removed in 2012 to deter vagrancy. In April 2016, the parks department appeared before the Board of Architectural Review to get their approval on replacement seats that would not have backs. The BAR did not support this and the parks department deferred their request. [12] The request came back to the BAR in April 2017 and the BAR voted to officially deny. [13]

Comparison to other pedestrian malls

There are other pedestrian malls in the United States. A group of 19 people from the County, City and the Chamber of Commerce visited Burlington, Vermont in mid-October 2002 to study their pedestrian mall. [14]

In 2012, the Virginia Chapter of the American Society of Landscape Architects designated the mall as an a "2012 Iconic Landscape." [15]

In 2013, the City Council authorized a Downtown Mall Ambassadors program which hired tour guides to help visitors and also to alert police to crime. [16]

1980: – Miller & Rhoads and Leggett, two large department stores, leave the mall for Fashion Square, heralding the worst sales year the Downtown Mall has had since its opening in 1976. [17]

– Opening Second Street West to vehicular traffic is first proposed by consultants hired by the city to analyze traffic and parking needs downtown. [17]

– A declining number of stores downtown leads to the creation of the Charlottesville Downtown Foundation (CDF), Fridays After Five and talks of creating a downtown tax district. [17]