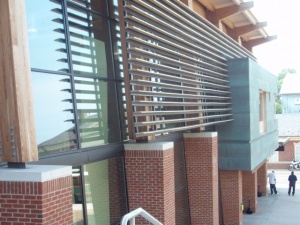 The Downtown Transit Center is the central hub of the Charlottesville Transit Service bus system. It is located on the east end of the Downtown Mall, adjacent to the Charlottesville Pavilion and across from city hall. The building also serves as downtown's visitors' center, and was designed to include retail space and an art gallery.

The Downtown Transit Center was designed by Wallace Roberts & Todd.[1] Completed in 2008, It was the first municipal building in Virginia to receive a LEED-NC Gold status award for its environmentally-friendly design and construction. It features a double-insulated glass, southern yellow pine, 90 percent recycled copper sheets, and louvered windows. Geothermal wells along Water Street heat the building, and a special membrane on the roof reflects heat to keep the building cool in the summer.[2]

The Charlottesville Albemarle Convention and Visitors Bureau rents space in the center for a visitors kiosk and administrative space. They pay the Charlottesville Transit Service an annual lease of $4,872 for the kiosk and $31,896 for office space.[3]

Philadelphia firm WRT won awards for the design of the 11,200-square-foot space.[5]

Description: The project consist of a Transit Center for the City of Charlottesville, offices for the transit operation and Tourism Agency, rest facilities adequate for the adjacent Amphitheater and extensive site development, all of which is carefully positioned on a very tight urban site with several constraints.

The building is of contemporary design and includes both structural steel and glue-laminated wood beams as the structural system and larger areas of glass. The design is very detailed with few right (90°) angles, which made construction more challenging. A large part of the building is clad with patinaed copper.

The project achieved LEED Gold Certification, which contributed to the complexity of the project. The Site development was extensive and includes a significant “Redi Rock” retaining wall to support the elevation of the Amphitheater where it intersects with the City street. Also included, is a pedestrian walkway from an adjacent street to the Amphitheater running along the Redi Rock retaining wall.

The Downtown Transit Center was a complex and difficult project to construct due to the very detailed contemporary design, extensive site work and extremely tight site conditions. The HVAC System is a Closed Loop Geo-Thermal System and coordinating the location of the wells and piping loop added to the complexity of the very tight site.[7]