The Daily Progress (often referred to as "the Progress") is the area's only daily newspaper. The paper is currently one of many owned by Lee Enterprises along with eight other Virginia newspapers. [1] 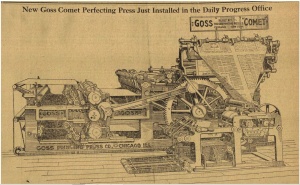 The first issue of the newspaper was published on September 14, 1892 by James Hubert Lindsay & Frank Lindsay. The brothers printed 200 copies on a used Campbell flatbed press at 112 Fourth Street, NE. James Lindsay was the newspaper's founder and publisher.[2] At the end of 1895, Lindsay announced in an editorial that subscriptions were to be paid in advance rather "than the old plan of waiting until the amounts due on subscription are large and burdensome." [3]

The paper had a radio station with the call sign WKBG that broadcast its first program on May 29, 1927. [5]

Around the 1930s, the Progress offered two newspapers, one catering toward white readers and the other aimed at Black readers called the Reflector. [6]

In 1960, the management and department heads began visiting newspaper plants in order to plan for the paper's long-term future. [7]

In August 2009 the Daily Progress began publishing stories written by Charlottesville Tomorrow, contributed at no cost.[10] The partnership ended in 2019 [citation needed]

In October 2019, reporters and production workers voted 12-1 to unionized under the Blue Ridge Guild. [13]

The sale to Lee Enterprises was completed on March 16, 2020. [14] Soon after the sale, Lee announced cuts at all of its Virginia newspapers, including the Daily Progress. Copy editing and layout jobs were all moved to centralized locations elsewhere in the country. [15]