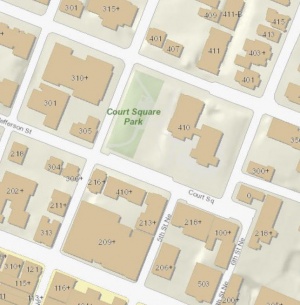 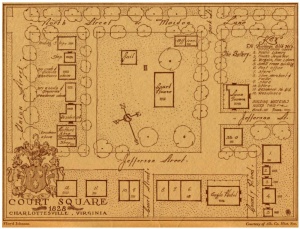 In the wake of General Assembly legislation [1] passed on February 11, 2020 which allowed local governments the authority to remove or relocate Confederate monuments in their public spaces, ending a state law prohibiting cities and counties from doing so, Albemarle County began to review the Court Square area. [2] 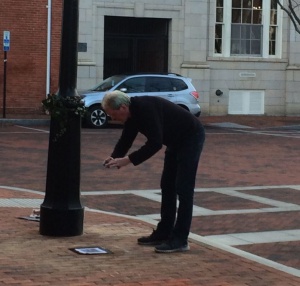 Installment of temporary marker by local artist on February 25, 2020

People were sold as slaves outside 0 Court Square. [citation needed] The commemoration of that horrible practice of legalized human trafficking is a topic of conversation in the third decade of the 21st century, especially after a historical marker on the pavement was removed by Albemarle County resident Richard H. Allan, III in early 2020. The marker was set in the sidewalk read "Slave Auction Block" and stated "On this site slaves were bought and sold." Charlottesville City Council (2020-2021) supported construction of a temporary marker on February 18, 2020. [3]

In 2018, Albemarle County and the City of Charlottesville began work to redevelop the Levy Opera House and site located at 350 Park Street. In the first phase of this work, a 3-story building will be constructed and connected to the Opera House. This renovation and construction will encompass approximately 32,034 square feet; anticipated completion of all construction and renovations by 2025.[4]

Court Square was renovated in the mid 2000's by replacing existing streets and sidewalks surfacing with brick, improving lighting, and replacement of overhead utilities with underground cables (undergrounding). The Charlottesville City Council allocated $1,520,000 to the project at its meeting on May 5, 2003. Funding from the federal government in the form of a Transportation Enhancement Fund (TEA) grant of $1,270,000 as well as a contribution of $250,000 from Albemarle County[5]

Court Square's history dates back to 1761, when Dr. Thomas Walker offered a 50-acre parcel to build a courthouse for Albemarle County. The first courthouse was completed in 1763 and stood in front of the current courthouse building. This prompted economic development in the area, such as the opening of the Eagle Tavern and the Swan Tavern. The square was bounded in 1792. [6] The grounds of the courthouse once held a whipping post, pillory and stocks, as was typical of the time. 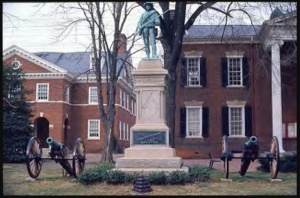 Site of Confederate monument "At Ready" 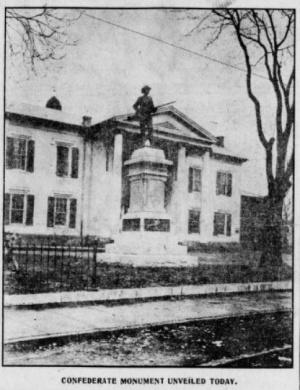 Removed on September 12, 2020, the life-size bronze statue of an unnamed Confederate soldier leaning on musket facing south, nicknamed "At Ready" sat at the south entrance to the courthouse along Jefferson Street. The pedestal made of gray granite quarried at Venue, Vermont; bottom base being one solid piece eight feet square; inscriptions; sculptor is unknown; arriving to Charlottesville by rail on March 10, 1909, within a week it was erected over a copper box that contained a number of records and items that were important to the community. Dedicated on May 5, 1909 to commemorate Civil War dead of Albemarle County and City of Charlottesville. 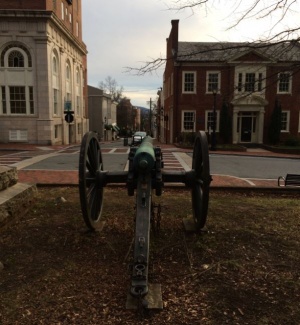 South courtyard (installed in 1909; removed in 2020) Removed on September 12, 2020, two bronze smoothbore 12-pounder Napoleons flanked the "At Ready" Confederate monument; a gun on the east and west, and a small pile of cannon balls, set in concrete and stacked to form a pyramid, had been placed directly in front of the base on the south.

On New Years Eve in 1909 at about 7 o'clock, J. S. Goodwin, a veteran Civil War artilleryman who had a store on Court Square, dry fired one of the cannons in front of the Courthouse. While there was no cannon ball, the amount of gunpowder used was sufficient to cause significant damage and alarm in the area.[7][8] David Maurer quotes the following from the January 1, 1910 Daily Progress: "[I]t only knocked out half the windows out of Mr. Flannagan's residence and the front of Cloud & Andwreson's looked like it had been shelled with shrapnel."

The Tredegar Iron Works in Richmond supplied about half the artillery used by the Confederate States Army (CSA). Tredegar was the biggest ironworks in the Confederacy during the Civil War, and a significant factor in the decision to relocate the capital of the Confederacy from Montgomery to Richmond. Located in downtown Richmond along the James River, the Historic Tredegar site is home to an award-winning 30,000 sq. ft. Museum surrounding the industrial ruins of Tredegar Ironworks. The building contains two galleries for exhibits (one permanent, two rotating) and has over 500 artifacts on display.[9]

Buildings on "The Square"

The first courthouse was a frame structure built in 1749. The county seat was moved to Charlottesville in 1762. The second courthouse was built on the Courthouse Square in 1762 to 1763 on land donated by Dr. Thomas Walker. The brick courthouse building was added in 1803, replacing the wooden structure, and now forms the north wing. The south wing was built in 1860 in the Gothic Revival Style. During the 1870s, the portico with its grand columns was added. In the 1930s, the building was renovated as part of a Works Progress Administration (WPA) project and the original Colonial and Federal style features were restored. In 2018, the Albemarle County Board of Supervisors discussed whether to relocate its general district and circuit courts outside of downtown Charlottesville.

Established as a county seat and trading center, Charlottesville had a courthouse from its earliest settlement. As county property, the courthouse was first located outside the town on the immediate northern edge and was not bordered by any streets. The intent was to reproduce an English green. This situation proved impractical, and with the 1818 annexation the courthouse property was incorporated into the town proper. The two-story, brick rear wing of the present courthouse building dates from 1803, earlier structures having been of wood. The front portion was added in 1860 and the portico in 1870. The courthouse was also used for religious services in the absence of any church building in Charlottesville before 1826. Thomas Jefferson, James Madison, and James Monroe worshipped in this early "common temple." [10]

350 Park Street (erected in 1851). Located at the corner of Park and East High Streets stands a large red brick building. It was erected in 1851 “for the purpose of a town Hall.” Up to that time the lot had served as a playground for men and boys, and was known as the Battery. Later, the hall became the Levy Opera House, but with the coming of the movies its public functions declined; in the 1950's it was known as the Park View Apartment.

The Swan Tavern once stood on this property. The exact date of the tavern’s building is not known; the lot was bought in 1773. The tavern building was a wooden structure with its painted sign of a swan hanging over the door. It was the home of the Jouett family. Jack Jouett, hero of the famous ride, lived here, and here the refugeeing members of the Virginia Legislature convened in 1781. In 1812 the tavern became known as the War Office, as military matters connected with that war were handled here. Following this, it gradually fell into decay and in 1832 collapsed. The present brick building was then erected.

Number Nothing is the original house on this lot. Structure built in the 1820's consisting of a double store, separately owned and handled. The name comes from the fact that at first the lot was intended for a horse lot. When the land was later sold, the other lots had been numbered in rotation - a numbered sequence was impossible, so Number Nothing was chosen. [11] 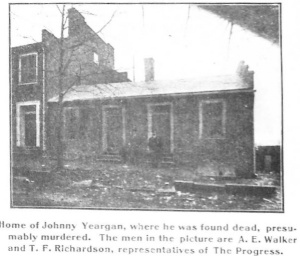 Located on North East Sixth Street and included in the Charlottesville Historic District. Built sometime before the Civil War, Over the years No. 220 has been used for offices by prominent lawyers and businessmen.

The original frame of the court building was erected in 1762, and has been continually used as a courthouse for 200 years. When the British attacked Richmond in the summer of 1781, the Virginia General Assembly made Charlottesville its emergency capital and met in the courthouse for deliberations. The second brick building was built in 1803 in place of the original wooden structure.[12]