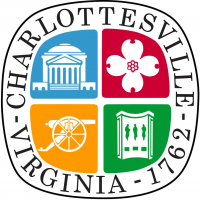 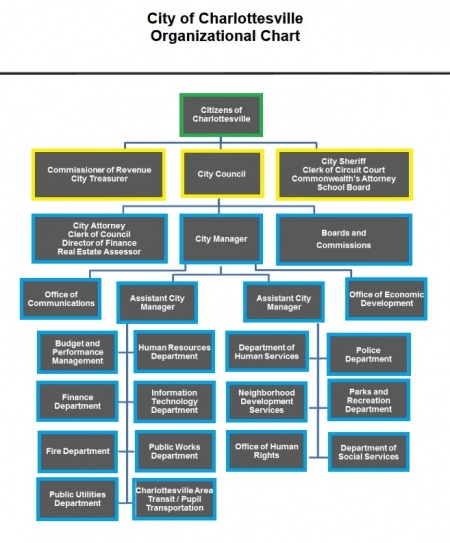 Since 1928, the city of Charlottesville has utilized a council-manager system. In this form of municipal government, the legislative and policy-determining powers are held by an elected council that employs a city manager who is responsible to the council for city administration. The council is headed by a president (mayor), elected by the council from among its members.

The structure of Charlottesville's municipal government is laid out in the City of Charlottesville Charter, the city's "constitution." The Charlottesville Dillon Rule charter establishes City Council as the legislative branch of government and grants Council certain powers and responsibilities. Council's most significant role is to enact laws, to adopt the city's operating budget and to hire the City Manager to run most city operations. Council is in charge of policy oversight and also hires the Chief of Staff/Clerk of Council, Director of Finance and the Real Estate Assessor. Council has an advisory role in appointing the City Attorney [2] and the Charlottesville Police Department's chief of police. Council also has the authority to decide who sits on various city boards and commissions. As a result, City Council has significant influence in shaping city policies and programs.

The Mayor of Charlottesville is selected from among the five members of the Charlottesville City Council. In this weak-mayor and council form of municipal government, the mayor is merely council chairman and has largely only ceremonial and parliamentary functions, though the mayor does have the power to set the agenda for council meetings, presides over council meetings and official city ceremonies.

In addition, the president enforces the Rules of City Council, which establish how Council conducts its business. The president also has to certify (by signing) all ordinances, orders, resolutions and petitions adopted by Council, as well as any leases or contracts requiring Council authorization. The mayor also represents the city on the state, national and international levels.

The Charlottesville City Council is the city's primary legislative body. It is responsible for approving and adopting the city budget, levying taxes and making or amending city laws, policies and ordinances. The Rules of City Council are drafted and approved by the five Council members at the beginning of each two-year Council term.

The city council consists of five members including the mayor. All members are elected at large and serve four-year, staggered terms. As for historically under-represented groups, the city has about the same percentage of blacks in council as in the general populations; in Charlottesville, blacks makeup 18.3 percent of the population [3] and 20 percent of the council.

Although Charlottesville isn’t the only Virginia municipality to issue credit cards to its elected officials, the practice isn’t standard operating procedure across the state. The city’s credit card use policy was created in 2008 and revised in 2015 by then-City Manager Maurice Jones. The mayor’s monthly limit is $2,500, the other four councilor’s have a $20,000 monthly credit limit. [5]

In 2012, councilors voted to include themselves in the city’s employee medical and dental insurance coverage plans. [6]

A full list of city council members since 1922 can be found here:

On March 2, 2020, pursuant to Sections 11-1 and 11-2 of the City Code, the City Manager, Tarron J. Richardson, submitted a budget for fiscal year (FY) 2021 addressed the Capital Improvement Program (CIP): These revenue sources, as well as the year end appropriations will play a significant role in funding future CIP projects. Over the next five (5) years, the City of Charlottesville is projected to fund $128M in CIP projects. Our long-term financial policy has a debt service maximum of 10%, with a target of 9%. By FY 2025, our projections indicate that the debt service rate will be approaching the 9% target.[7]

Cities in Virginia are authorized to issue general obligation bonds so long as total general indebtedness does not exceed ten (10%) percent of assessed value of taxable real property; no referendum required. There is no amount limitation imposed regarding revenue bonds. (Virginia Constitution, Article VII, §10)

City Council appoints members to approximately 40 various Boards and Commissions as terms expire or appointees resign. A series of advisory boards and commissions that are made up of non-elected citizens, whom city council members have appointed and approved, advises the Charlottesville City Council. The roles of these boards and commissions are to review, debate, and comment upon city policies and legislation and to make recommendations to the city council.

The governing body may provide for (i) reimbursement of the actual expenses incurred by members while serving on such advisory boards, committees, and commissions and (ii) compensation to members for their services for attendance at regularly scheduled meetings, and for training in an amount determined appropriate by the governing body from available funds.[8]

Some of the agencies are strictly volunteer without any compensation. Others, established by State Code, allow "token" compensation and some reimbursement of expenses incurred. For a list of Charlottesville's commissions, boards and committees, see List of Boards and Commissions

The Charlottesville City School Board is a seven-member board that is responsible for directing the program of public education for the City’s approximately 4,000 students. Board Members have been elected since 2006. Prior to that, they were appointed by City Council. School Board candidates in Virginia must qualify for the ballot as “independents” (by voter petition signatures), so primary elections are never held for school board.

Constitution vests State Board of Education with authority to establish school divisions, subject to "such criteria and conditions as the General Assembly may prescribe." With a few exceptions for some towns and city/county combinations, Board has established divisions along city and county lines. (Virginia Constitution, Article VIII, §5; Virginia Code, §22.1-25). School board members for school divisions composed of single city are selected by the city council or by popular election. (§§22.1-48 et seq. and 22.1-57.1 et seq.)

See Mayor of Charlottesville for a list of the city’s mayors and their partisan affiliation.

In 1980, Council appointed a Committee to Study Council Change, to study whether the city should change the method by which Councilors were elected. Voters approved a referendum on the change in November 1981, but a majority of Councilors, lead by Mayor Frank Buck, opted to hold a second ballot. Voters on Tuesday, May 4, 1982, rejected the idea.

The city of Charlottesville held general elections for City Council (3 of 5 seats), Charlottesville City School Board (4 of 7 seats), Soil & Water Conservation District Director and the Clerk of Court on November 5, 2019. The Democratic primary was on June 11, 2019. The deadline for candidates to file to run in this election was March 28, 2019. Of the 32,291 total reported number of eligible voters registered in the City of Charlottesville, 3,657 turned out for the top vote getter Michael Payne (for a less than 12% voter turnout). Payne co-founded Indivisible Charlottesville, a progressive political action organization, and is a former co-chair of the Charlottesville Democratic Socialists of America.[14][15]

Issues in the city

In February 2009, the Weldon Cooper Center published an efficiency study with the Virginia Institute of Government that had been commissioned by the city of Charlottesville.

In 2016, the city has paid the Novak Consulting Group $101,250 to conduct an efficiency study for its government structure. This comes nine years after the Weldon Cooper Center for Public Service published an earlier study. The study was requested by City Councilor Kathy Galvin and was intended to shape budget discussions for fiscal year 2018.

Voter petition for an initiative referendum is permitted only if the county, city or town charter includes provisions allowing voters to circulate petitions for such an issue. The charter also would provide the procedures to be followed, including the number of signatures required, the deadline for filing, restrictions on types of questions permitted, etc. Compliance with the provisions of §§ 24.2-684 and 24.2-684.1 also is required.[20]

The initiative process is only available in the four of the 229 Virginia charter municipalities that have exercised their home rule authority to institute such a process. They are Hampton, Lynchburg, Norfolk, and Portsmouth.

Recall of local elected officials in Virginia is available in some jurisdictions, including the City of Charlottesville.

Local issues are permitted to be placed on the ballot only if the question is authorized by statute or by charter. In such cases the question is specifically stated in either the city charter or in the section of the Code of Virginia that permits the question. Example: the Direct Election of School Board is found in § 22.1-57.2. The signature requirements also are included in that section.