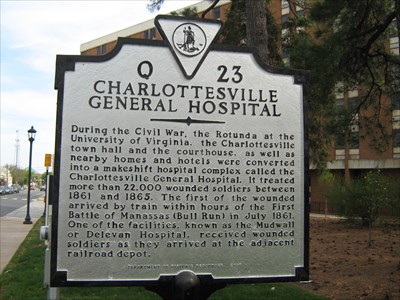 The Charlottesville General Hospital was a military hospital founded in July of 1861 after the first battle at Manassas. Its proximity to the railroad and the University, where many physicians worked, made it an ideal location. It treated over 22,000 patients, mostly Confederate soldiers, over the course of the war.[2]

There are two historic markers detailing the hospital: one at the intersection of West Main Street and 13th Street, the other near Jefferson Park Avenue between the University Medical Center and University of Virginia Grounds.[2] A plaque on Varsity Hall at UVA mentions the building was used as a hospital during the Civil War, which corresponds to its use as a student infirmary since 1858.

Over 1,100 patients died at the Hospital. Black laborers were tasked with grave digging and burying the Confederate dead in a plot adjacent to the University cemetery on current-day Alderman Road. A total of 1,097 soldiers were interred in the cemetery during the war.[1]

About forty percent of the patients were treated for gunshot wounds, making amputation one of the most frequently performed medical procedures. As was the case in most hospitals of the period, soldiers suffering from diseases accounted for most patients and fatalities; diarrhea, typhoid, measles, dysentery, and pneumonia were far more common ailments than wounds. As the war continued, there were severe shortages of medical supplies. This was exacerbated by the Federal blockades. The perpetually inadequate medical supplies at the hospital forced the staff to resort to indigenous plants, such as dandelions, dogwood, juniper, and persimmons, with known or suspected medicinal properties.[1][2]

During the Civil War, the Rotunda at the University of Virginia, the Charlottesville town hall and the courthouse, as well as nearby homes and hotels were converted into a makeshift hospital complex called the Charlottesville General Hospital.[2] University buildings were taken over as needed. The hospital leadership briefly considered using Monticello as a smallpox outpost, but no action was taken.[1]

Charlottesville General Hospital employed approximately three hundred Charlottesville residents and grew to a capacity of 500 beds staffed by between fifteen and fifty doctors.[2][1] Local Black people were impressed into service at the hospital or were hired as nursing staff.[2]