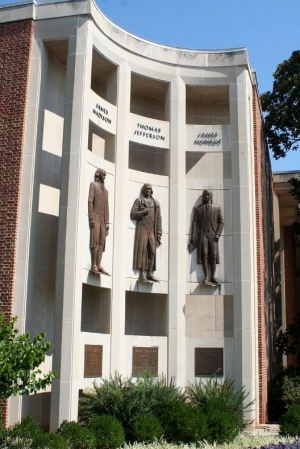 ​​The City of Charlottesville has operated under a council-manager form of government since 1928 where members of the City Council serve four-year terms and are elected at-large on a staggered basis. The city manager is appointed by the council and acts as chief executive officer - implementing policies established by council. The mayor and vice-mayor are chosen by the council.

Following the 2019 election, held on November 5, 2019, three new members, Lloyd Snook, Sena Magill and Michael Payne, each took their oath of office on December 19, 2019, allowing them to assumed full duties immediately on January 1, 2020 and thereby filling the seats being vacated by Mike Signer, Wes Bellamy and Kathy Galvin who each declined to seek re-election.

On January 6, 2020, Walker (I) was selected on a 3-2 vote for a second term as mayor at the bi-annual organizational meeting of the City Council. Walker and councilors Payne (D) and Magill (D) voted in favor of her appointment. Councilors Hill (D) and Snook (D) voted against it. New councilor Magill (D) was elected 4-1 as vice-mayor.[5]

City Council appoints the City Manager, the Director of Finance, the City Assessor, the Clerk of the Council and members of major policy-making Boards and Commissions. Council has an advisory role in appointing the City Attorney and the Chief of Police.

Chief of Staff / Clerk of Council

In the fallout of the deadly 2017 Unite the Right rally, Walker was first appointed mayor with a 4-1 council vote in January 2018 [7] and is the first mayor to serve more than one term since Satyendra Huja stepped down in 2015. Walker received the most votes (29.13%) during the 2017 election for City Council.[8] Prior to the 1990's, the custom of the council was to select as mayor the most senior council member who had not already held the position. In the 2019 general election, Magill got the most amount of votes in history for a Charlottesville City Councilor. [9]

Starting in March 2020, City Council Chambers were closed to the public and meetings were conducted virtually via a Zoom webinar.

Albemarle County and Charlottesville declared local emergencies on March 12, 2020 in order to help coordinate public safety efforts to contain the spread of the disease. This gave officials more flexibility to conduct business and resulted in the temporary halt of public meetings as well as the delay of the adoption of the FY21 budget in Albemarle County. [10]

“I don’t think our current city logo reflects us as a city. We have changed. We have been reexamining who we are and I think a logo is pretty important with that.” Councilor Sena Magill, Nov 17, 2020

Statue of Lewis, Clark and Sacagawea 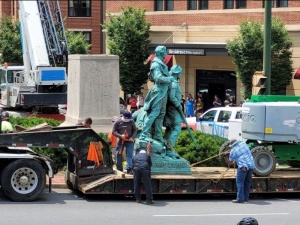 On Saturday, July 10th 2021, during an emergency/special meeting, the Charlottesville City Council voted unanimously to remove the city’s Lewis & Clark and Sacagawea.

On Saturday, July 10, 2021 Mayor Walker called a Special/Emergency Meeting to order at 12 p.m. to discuss removal of the Lewis, Clark, and Sacagawea statue on West Main Street. The 5-0 vote comes after city crews removed a statue of Confederate Gen. Robert E. Lee and Gen. Thomas “Stonewall” Jackson the same morning. Spectators lined the blocks surrounding the park, and a cheer went up as the Lee statue lifted off the pedestal.

On Tuesday, November 30, 2021 Charlottesville City Council held a Special/Emergency Meeting for the purpose of discussing the withdrawal of appointed Interim City Manager Mark Woolley. Mr. Woolley had reached out to Mayor Nikuyah Walker on Sunday, November 21st to verbally inform her of his decision to withdrawal his application as Interim City Manager. After Tuesday’s closed session meeting, Council stated that they are considering entering into a contract with a firm for interim services; deputy City Managers Ashley Marshall and Sam Sanders will continue to perform enhanced duties for the City until an Interim City Manager is placed.

Creation of an Affordable Housing Plan

Endorsed by the Council in March 2021

There has been high turnover in the leadership in Charlottesville in recent years. More than five high-ranking officials have either been fired or resigned. City Councilor Michael Payne called it a “leadership crisis.”

February 19, 2021: Charlottesville-Albemarle Convention and Visitors Bureau (CVACB) reported that transient occupancy tax revenue, which comes from people staying in area hotels, was drastically lower last year compared to previous years. Tourism normally creates more than $10 million during the summer and fall seasons. At the beginning of 2021, tourism dollars were behind by roughly $3 million. In 2018, 86 percent of business owners said they were seeing fewer tourists and 35 percent said they're seeing fewer local customers.

$18,000 for councilors and $20,000 for the mayor. Charlottesville has one of the highest average salaries for council members in Virginia. State code sets salary limits for members of city councils based on population, ranging from $11,000 to $30,000. laws of the Commonwealth.

In 2012, council voted to include themselves in the city’s employee medical and dental insurance coverage plans. Employees and councilors who already had medical insurance from another source were allowed to opt out of coverage and receive a $500 annual stipend paid over the course of the year. [12]

Over the next year (July 1, 2020 to June 30, 2021), Council will be reviewing the plan and making revisions and updates for future goals and budget alignment. Below are some highlights of expenditures included in the adopted FY2021 Budget budget that fall under the priorities of the Strategic Plan.

Elections for the Charlottesville City Council (2020-2021) took place in 2019. Three of the five seats on the Council were open. The Democratic primary was held on June 11, 2019, and the general election was on November 5.

Since 1928, the council has been composed of five councilor members, one of whom serves as mayor. Each member is elected at-large, by voters to four-year, staggered terms.

Charlottesville is a city manager-weak mayor form of local government, the positions of mayor and vice-mayor largely are ceremonial. The President of City Council (called mayor) and Vice-president (called vice-mayor) are elected by the five members of Council at the beginning of each two-year Council term and serves until the next election.

Council's most significant role is to enact laws, to adopt the city's operating budget and to hire the City Manager to run most city operations. Council is in charge of policy oversight and also hires the Chief of Staff/Clerk of Council, Director of Finance and the Real Estate Assessor. Council has an advisory role in appointing the City Attorney [16]and the Chief of Police. Council also has the authority to decide who sits on various city boards and commissions. As a result, City Council has significant influence in shaping city policies and programs. Among the officers and clerks who have served at the pleasure of the Charlottesville City Council (2020-2021):

Chief of Staff/Clerk of Council

Formerly referred to as the City Council Clerk, the position was expanded by the Charlottesville City Council (2018-2019) under the title of Chief of Staff / Clerk of Council[17].

The city has an elected at-large school board. Prior to 2006, members of the Charlottesville City School Board were appointed by the City Council.

refer to Main Article: List of Boards and Commissions

Charlottesville City Council reviews Boards & Commissions applications on a quarterly basis after an opening has been posted for a minimum of 30 days, unless Council determines a vacancy needs to be filled sooner and a deadline is posted otherwise. Council may extend a deadline as necessary.

The appointment schedule for 2020 is as follows:

The appointment schedule for 2021 is as follows:

Regularly scheduled Council meetings take place on the first and third Mondays of each month at 6:30 p.m. in Council Chambers at City Hall pursuant to Charlottesville City Code Section 2-41. If a regularly scheduled Council meeting falls on a holiday, then the meeting will take place on Tuesday. Council normally cancels one meeting during the summer months. In 2019, the Charlottesville City Council (2018-2019) cancelled its July 15 meeting. During the January 6, 2020 meeting, the current Council will discuss its preference for cancelling one of its summer meetings. If Council decides to cancel a meeting, the schedule will be amended to reflect the cancellation.

As of January 6, 2020, the proposed regular Council meeting schedule for 2020 was as follows: