The Charlottesville Circuit Court is part of the 16th Judicial Circuit of Virginia. During renovation of the court building located at 315 East High Street, the clerk's office will be located in the Jessup Building at 614 E High Street, while the courtroom will be held at the Levy Building at 350 Park Street.[1]

The circuit court is the trial court of general jurisdiction in Virginia, and the court has authority to try a full range of both civil and criminal cases. Civil cases involve disputes essentially private in nature between two or more parties; criminal cases are controversies between the Commonwealth and persons accused of a crime. Only in a circuit court is a jury provided for the trial of many of these disputes and controversies. The Virginia circuit court system is composed of 31 judicial circuits with 120 separate circuit courts in the various counties and cities of the Commonwealth. The Supreme Court of Virginia establishes the rules of practice and procedure for the circuit courts, and the Executive Secretary of the Supreme Court serves as the administrator of the circuit court system.[2] 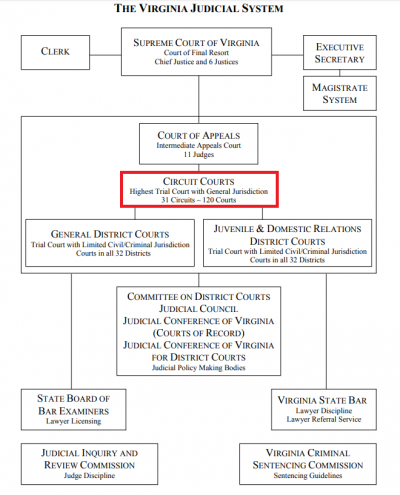 Clerk of the circuit court

The clerk of the circuit court is a constitutional officer elected to an eight-year term by the voters of the City of Charlottesville. The clerk handles administrative matters for the court and also has authority to probate wills, grant administration of estates, and appoint guardians. The clerk is the custodian of the court’s records, and the clerk’s office is where deeds are recorded and marriage licenses issued.

A circuit court judge is elected for an eight-year term by a majority vote of both houses of the General Assembly. There are at least two judges serving each circuit. The chief judge of the circuit is elected by majority vote of the judges serving the circuit. Circuit court judges are required to reside in the circuit they serve and must have been admitted to the Virginia Bar at least five years prior to election or appointment.