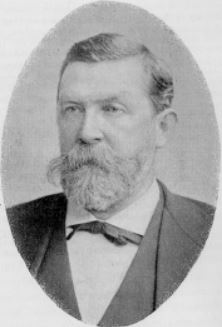 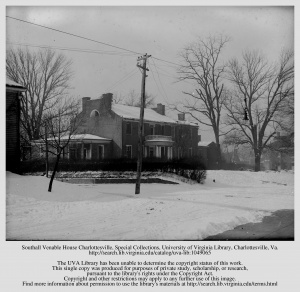 Colonel Charles Scott Venable (March 19, 1827 – August 11, 1900) was a mathematician and Confederate officer during the Civil War. In mathematics, he is noted for authoring a series of primary school textbooks as a University of Virginia professor (1865-1896). Venable was an aide-de-camp to General Robert E. Lee from 1862 to 1865.

Venable Elementary School is named for him.

Born at Longwood, the country home of his family, near Farmville, Virginia, April 19, 1827. He matriculated in Hampden-Sydney College as a sophomore in 1839, graduated in 1842, and served as tutor in Mathematics until 1845. In the fall of 1845 he entered the University of Virginia for post-graduate study, spending two years there under Edward Courtenay (1803-1853) [1]and his colleagues, and later one year at Berlin and Bonn under Encke, Argelander, Lejeune Dirichlet and Dove. Venable held chairs of Mathematics successively at Hampden-Sydney College (1846-1855); at the University of Georgia (1855-1856); and at the University of South Carolina (1856-1861).[2]

From the Sketch of COLONEL CHARLES SCOTT VENABLE BY Professor William M. Thornton

The outbreak of the Civil War found Venable at Columbia, South Carolina, in the very focus of that great political and military movement. He volunteered at once, and as Second Lieutenant of the Congaree Rifles was present at the fall of Fort Sumter (April 13th, 1861). The summer of that year found him in Virginia, fighting as a private at first Manassas (July 21st, 1861) in the South Carolina Governor's Guards, and then patrolling the Potomac as a volunteer aide on the staff of General Wade Hampton. Promoted to be Lieutenant of Artillery, he was ordered to Louisiana, and there shared in the ineffectual defense of New Orleans. Later he was under General M. L. Smith in organizing the fortifications of Vicksburg. During the winter of 1862 the Confederate Congress created the office of "Military Adviser to the President." General Robert E. Lee was selected to fill the position and entered at once upon his duties (March 13th, 1862). The staff allowed him was a military secretary with the rank of colonel (Armistead L. Long) and four aides each with the rank of major (Randolph Talcott, Walter H. Taylor, Charles S. Venable and Charles Marshall). Venable was promoted Lieutenant Colonel November 4th, 1864. He served continuously on Lee's staff from 1862 until the surrender of the Army of Northern Virginia at Appomattox, April 9th, 1865, brought the war to its heroic close. From the Sketch of COLONEL CHARLES SCOTT VENABLE BY Professor William M. Thornton [3]

After the war, Venable served on the faculty of the University of Virginia as a professor of mathematics for 31 years. During this time, he served two terms as Chairman of the Faculty, first in 1870-1873 and then again in 1886-1888. Venable acted as the primary correspondent with Leander J. McCormick from 1870 through to the dedication of the observatory in 1885. Venable served on the committee appointed by the Board of Visitors to obtain information about the proposed telescope and to suggest a possible site for the observatory. Venable also spear-headed the fund-raising efforts, particularly from friends and alumni of the University.[4]

The historic Venable neighborhood is named for Venable, as is Venable Elementary School. Colonel Venable made considerable contributions to the University community and has been honored with the University dormitory, Venable Hall, named for him. [5]

Venable's home was located in downtown Charlottesville at 101 East Market Street. Originally known as the "Venable property", city native and philanthropist Paul Goodloe McIntire purchased the property, knocked down the existing buildings while preserving some of Venable's original landscaping, and then deeded the land to be known as "Lee Park" to the city in 1917 in memory of his parents. McIntire intended that the land be used as a public park and specifically to erect a large equestrian monument of Robert Edward Lee mounted on his horse Traveler as the exclusive centerpiece of the park. McIntire donated the completed statue seven years later in 1924.[6]

Whiling away long hours conversing with States Rights Gist, James and Mary Chesnut, and other notables, Venable often expressed both his disgust at the northerners who were waging war against “Christian” slavery and those who sought commissions in the Confederate army behind the lines."

[By 1867], he proposed a curriculum change to make the mathematics program more flexible, and staunchly opposed any attempt to open the university [of Virginia] to black students

From Sacrificing for the Lost Cause by Robert W. Sidwell, quoting material from Venable's papers:

He derided the idea of giving freedmen the vote, expressing thanks that Virginia had escaped the “black dominion” of military Reconstruction, and derided the idea of blacks attending the University of South Carolina as “the Fetish of abolitionists.” Finally, he summarized Reconstruction itself as “the cruel crotchets of a sentimental philanthropy.”

From the Charles Venable Papers (UNC)[7]:

Similarly, although Charles Venable felt the necessity of preserving heroic memories of the Confederacy, he was too preoccupied with personal and professional matters to participate in most public efforts to promote the “Lost Cause.” He continued to correspond with other former Confederate officers... and joined local historical associations to promote Confederate memory, writing that “I esteem highly the work of such societies in collecting and preserving the materials for local and state histories.” Because of his Confederate sympathies, Wade Hampton offered him the presidency of the University of South Carolina in 1882.