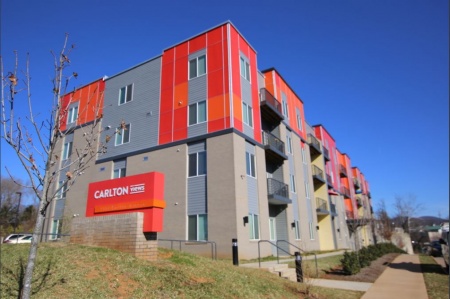 Carlton Views (later named Carlton Views Apartments) is a 54-unit (1, 2, and 3 bedroom) apartment complex developed by Fountainhead Properties that was completed in 2017 that provides affordable housing for the elderly and disabled. The project was subsidized with a $950,000 grant from the Charlottesville Affordable Housing Fund. [1] It is adjacent to the Blue Ridge PACE and was built on the site of former H.T. Ferron concrete plant.

After construction completion, move-in at the Carlton Views Apartments started in February 2017. Built in 2016 with the support of a $950,000 grant from the city of Charlottesville, this new housing development features 54 affordable apartments. Situated next to Blue Ridge PACE, a senior care center in the Belmont neighborhood, the new apartment building came out of a partnership between the Richmond-based Fountainhead Development and the Piedmont Housing Alliance. Each apartment is rent-restricted and intended for people who make less than 60 percent of the average median income. According to the U.S. Census Bureau, the median household income in Charlottesville is $63,918.[2]

City Council voted 4-1 to approve a special use permit for the project on May 23, 2016. The project was supported by Dave Norris, Dede Smith, Mr. Satyendra Huja and Kristin Szakos. Kathy Galvin voted against the project and stated she felt it was not compliant with the Comprehensive Plan. [3]