From Cvillepedia
(Redirected from CHS)
Jump to: navigation, search

BLAST, an initiative that gives students tablet computers to use in school and at home, was implemented sometime in the 2012/2013 school year.[3]

Jill Dahl stepped down as principal at the end of the 2016 school year. [5] [6] She succeeded Aaron Bissonnette who only held the position for a matter of weeks. [7] Eric Irizarry took over in the summer of 2016. [8]

Planning for the school began in 1970 when City Council agreed to spend $7.2 million. When a site was identified at McIntire Park, it was soon learned that the deeds of the land restricted its usage to "white people as a park and playground." The site had to be moved outside of park limits. [9] Construction of the school was delayed and the fall semester had to be moved up to September 16, 1974. 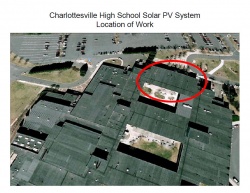 The city installed a solar photovoltaic array on the high school's roof in the winter of 2012. [10]

Some of the funding for the project comes from the Virginia Department of Mines, Minerals and Energy as part of the federal American Recovery and Reinvestment Act. When installed, the panels will provide a minimum of 64 kilowatts and will be used for experiments by CHS students, Piedmont Virginia Community College students and the University of Virginia School of Engineering and Applied Sciences. The school system has contributed $98,000 for the project. [11]

Paul C. Harris, a professor at the University of Virginia's Curry School of Education, will conduct in the fall of 2013 a study on the academic performance of African-American male student athletes at CHS. [12]