From Cvillepedia
(Redirected from CAT)
Jump to: navigation, search

Charlottesville Area Transit (CAT) is a city-run agency that operates several bus lines throughout Charlottesville and Albemarle County, including a free trolley service between the Downtown Mall and the University of Virginia.

While operated by the city, ten of the 13 routes travel within Albemarle County. [1] Route changes planned in 2021 have been delayed to a lack of drivers and won't be made until at least the fall of 2023. [citation needed]

A Regional Transit Partnership was established in 2017 to help encourage cooperation in planning but has no input into how CAT is managed.

For more on public transportation history, read that page on cvillepedia.

The original new logo for Charlottesville Area Transit which was rejected

New fareboxes were to have been installed in 2014 to improve the system's ability to measure performance. [4]

On Friday, September 6, 1996, the free "Hoo Bus" began service, operating between the university & downtown on Thursday, Friday, and Saturday nights. Initial funding was provided by the city, the university, and Charlottesville 2000 for a two-month trial period.[5] Each entity contributed $3,666.66 for the initial service. with the private contribution coming from D&R Development, the owners of Regal Cinema on the Downtown Mall.[6] An additional $5,100 appropriation on December 2, 1996 extended the service, with $2,550 from the city's General Fund balance and $2,550 from the university.[6]

The most popular route is the "free" trolley that circulates between the Downtown Transit Center and the University of Virginia. In 2019, this service was rerouted to travel along South Street to better serve Midway Manor. That change to service was extended through at least May 2020 as the overall route is studied further, possibly through a consultant. [14]

Slide from the December 8, 2022 meeting of the Regional Transit Partnership

The agency had a $8.1 million operating budget in FY2018 and 120 employees. Service is provided 18 hours a day Monday through Saturday and 12 hours a day on Sundays and weekends. In calendar 2017, 2.1 million passengers boarded buses. [15]

CAT’s budget for the current fiscal year is $7.3 million, including a $1.05 million contribution from Albemarle County. Charlottesville taxpayers contribute $2.27 million to the service, and UVa pays $241,535 to allow students and faculty to ride fare-free. Federal funding is $1.65 million and state funding is $1.38 million. [1]

The University of Virginia paid $254,000 to CAT for reciprocal ridership in fiscal year 2019. [citation needed]

The University of Virginia paid $259,100 to CAT for reciprocal ridership in fiscal year 2019. [citation needed] 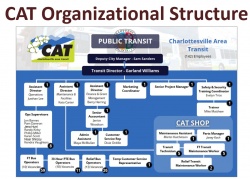 Slide from the December 8, 2022 meeting of the Regional Transit Partnership

Decisions about the system ultimately lie with City Council. The city is also a member of the Regional Transit Partnership, a non-binding advisory group that seeks to improve cooperation and coordination between CAT and other transit agencies such as JAUNT and University Transit Service. [18]

CAT is mandated by the Virginia Department of Rail and Public Transportation (DRPT) to create a regional transit plan every six years. One such plan was under development in the summer of 2018 and adopted by City Council in December 2019. However, at the time director Garland Williams said he would not implement route changes without further public input. Such changes are under review in the summer of 2021.

City Council also voted to create a CAT Advisory Board at their meeting on October 1, 2018. The mission is to "serve as a rider-centric steering committee for Charlottesville Area Transit by soliciting and communicating riders' perspectives regarding CAT initiatives and operations." [19] It has not met since the pandemic began. [citation needed]

As part of the DRPT mandate, the Connetics Group was hired in 2011 by the DPRT to produce a transit development plan to prioritize funding in the next six years. Preliminary results of their study were presented to council at a work session on March 4, 2011.

Council rejected many of the suggestions, most notably that which would have realigned two low-performing city routes to provide additional service to the relocated Martha Jefferson Hospital.

Soon after, CAT director Bill Watterson left his position in February 2012.[21] Lance Stewart, the city's facilities manager at the time, served as the acting director. [22]

In the summer of 2012, City Council hired the firm Nelson Nygaard to study the system once again to suggest ways to redraw the system. [22] The firm completed the $116,000 study [23] in March 2013. It explored ways to adjust to existing fixed-route bus services to improve service quality and increase ridership. It also considered potential new routes.[24]

Route 11 from the Downtown Mall to Fashion Square Mall along Rio Road East was one of the new routes suggested by the study and was approved by the Charlottesville City Council on July 1, 2013. Beginning in August, the new route allowed passengers to travel between downtown Charlottesville and Route 29 in 30 minutes instead of the 50 minutes required by the Route 7 bus.[23]

A group of activists held a rally in May 2012 demanding that the city fully fund service on Sundays and holidays. [25] That group's protest led to the formation of the group Transit Riders Association of Charlottesville.

Following the hire of John Jones, other service changes were made on January 4, 2014 despite protests. [26]

A few months later, Jones reported to City Council that ridership was down 8 percent. [27]

John Jones briefed Council on the status of the CAT system on February 20, 2018. He acknowledged that ridership has been declining, but stated that is part of a national trend. Jones cited lower fuel prices and ride-hailing services as some of the reasons for the decline. However, he also said that CAT could do more to attract new riders such as increasing frequency, improving reliability and making the buses easier to use. [15] [28]

Jones also told Council that one hour of service costs $71.27 to operate. He said if Council wanted to increase frequency to twice an hour for all routes, it would cost $2.64 million a year. Additionally, four more buses would be required to bring the total fleet to 40. There would also be a need to hire more personnel. [15]

Michael Baker International was hired to work on CAT's new plan which is expected to be completed by late July. As of 2019, CAT had abandoned work on the plan in advance of beginning work on the newly state-required Transit Strategic Plan, on advice of DPRT.

Council adopted the plan on December 16, 2019 but only after Garland Williams said he would not be implementing any of the changes in the near term. [citation needed] New TDP plan

There is a fuel alternatives study underway. [29]

Rides have been fare-free since the COVID-19 pandemic began in March 2020, and are expected to remain fare-free until at least June 30, 2026 with the aid of a Department of Rail and Public Transportation Transit Ridership Incentive Program (TRIP) grant.[30]

For rides requiring a fare,

Under a pre-paid arrangement between CAT and the University of Virginia, UVa photo IDs of students, faculty, and staff are accepted as fare on all CTS buses. [3]

Youth ages 6 to 18 who reside in Charlottesville or Albemarle County ride free in summer months under the "Youth Ride FREE Program".

Ridership is measured on the fiscal year, ending June 30.