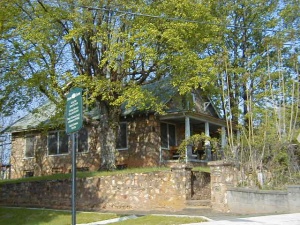 The C. B. Holt Rock House, at 1010 Preston Avenue is a historical designated structure in the Venable neighborhood. Located directly across from the Booker T. Washington Park at the intersection of Preston Avenue and Rosser Avenue East, Charles B. Holt built this Arts and Crafts-style house in 1925-1926.

C. B. Holt Rock House Marker Inscription: African American Charles B. Holt owned a carpentry business in Charlottesville’s Vinegar Hill neighborhood. The son of former slaves, Holt built this Arts and Crafts-style house in 1925-1926, during the era of segregation when blacks were more than a quarter of the city’s population but owned less than one-tenth of its private land. He lived here with his wife, Mary Spinner, until his death In 1950. Erected 2008 by Department of Historic Resources. (Marker Number Q-28a.)

Asalie Minor Preston (c. 1904-1982), a schoolteacher in Albemarle County’s “colored” schools, married Holt’s stepson and lived here after Charles B. Holt died in 1950. In 1877 Asalie Preston’s grandfather had purchased land north of Charlottesville for $300. Her father, a farmer and schoolteacher, worked the land and slowly accumulated over 66 acres. In the 1970s, suburban expansion along Route 29 North made the land valuable. Asalie Preston and her siblings sold the land for over $500,000 and later established a scholarship fund. By 2006, the Minor Preston Educational Fund was providing between $150,000 and $200,000 a year in scholarships for Charlottesville area children.[1]