Booker T. Reaves, Sr. (1915-1996) was a pioneering black educator in Charlottesville, a civil rights activist, and the principal of the Jefferson School before and during integration in the 1950s.[1] [2]

Reaves was born in Free Union, Virginia and moved to Charlottesville as a young child. He was raised in the Ridge Street neighborhood and attended segregated Charlottesville public schools. He graduated from the Hampton Institute and later Howard University.

Time at the University of Virginia

In 1955, he received his master’s degree from the School of Education at the University of Virginia despite UVA refusing all transfer credits from Howard. Reaves was the first Black graduate of UVA. Between his degrees, Reaves taught in local Black schools.

Career and Political Action in Charlottesville

In 1945, he co-founded the Charlottesville chapter of the NAACP along with Reverend Bunn and his wife Imogene Bunn. After earning his master’s, he became the principal of Jefferson High School, his alma mater, and the all-white McGuffey School. Reaves was a negotiator for desegregation during massive resistance, and fought to keep schools open for the benefit of the children. He retired as the Assistant Superintendent of Charlottesville City Schools, the first Black man to hold not only the assistant superintendent position, but any administrative position. Today, Booker Reaves Media Center at CHS is named in his honor.

In an interview on November 7, 1980, for the 'From Porch Swings to Patios: Oral History Project, Booker Reaves describes Charlottesville's school system and the NAACP's legal battle to integrate schools in Charlottesville as well as the Massive Resistance movement against integration. Reaves tells two "myths" behind the Vinegar Hill name, and names several black neighborhoods in the Vinegar Hill area, also in cases providing the name's origin. He lists some Black businesses, churches, social organizations, fraternities and sororities prominent in Vinegar Hill. Reaves comments on the apparent harmony among Vinegar Hill residents despite differences in wealth and homeowning versus renting status. He concludes that "the segregated days were not all bad days" in terms of community cohesion, and that the Vinegar Hill project was good for Black people in terms of standards of living.[3] 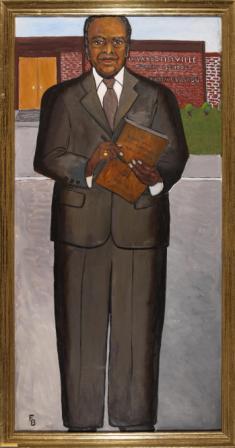 Reaves is one of several people commemorated by the late 20th-century artist Frances Brand as part of her Firsts series.[5]