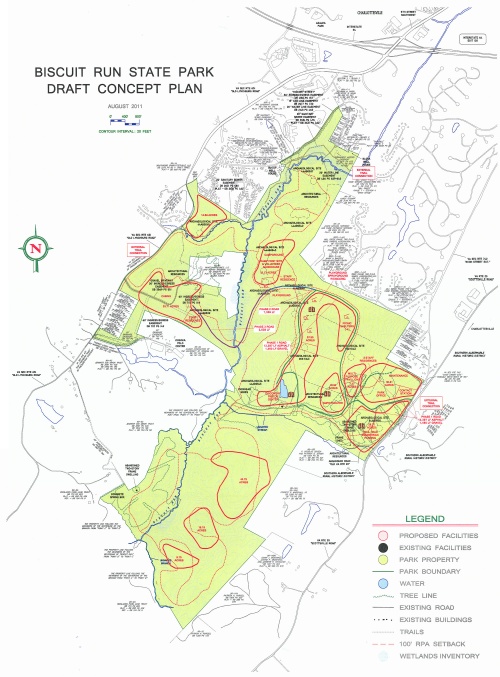 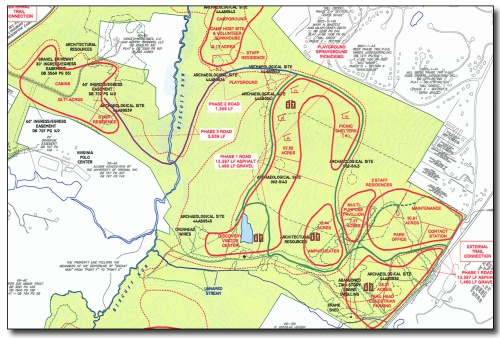 Biscuit Run Park is a planned 1,200-acre park in Albemarle County's Neighborhood 5 designated growth area. It had been intended to be a state park but Albemarle County will now program the park. [1]

The land for the park was once intended for the large Biscuit Run development as well as a 400-acre county park, but was purchased from the developer, Forest Lodge LLC, by the Commonwealth for $21.48 million in cash and tax credits in January 2010. A lack of state funds could mean the park does not open until 2020. [2]

The Albemarle County Board of Supervisors approved a rezoning back to the rural areas district on December 4, 2019. [3]

The Biscuit Run State Park Master Plan Advisory Committee held several meetings to develop the park’s master plan, including an inventory of natural and cultural resources. [4] This process concluded with a final public hearing on September 19, 2011. [5] The goal is to have a master plan in place by the end of 2011. [4]

Part of the original intended funding comes from mitigation paid by Dominion to the state for the Atlantic Coast Pipeline. The Board of Supervisors discussed this at their meeting on December 5, 2018. [8]

Because the primary vehicular access will be from Route 20, Habitat for Humanity wants to create an extensive network of bike and pedestrian trails into the park from access points in a redeveloped Southwood Mobile Home Park. [10] In March 2017, Habitat and the Virginia Department of Conservation and Recreation agreed to a land swap where Habitat got land for athletic fields close to Southwood whereas DCR got land more suitable for a state park. [11]

Commonwealth officials indicated willingness to discuss holding the Albemarle County Fair at the site until the fair finds a permanent home.[12] However, nothing materialized for the 2011 County fair.