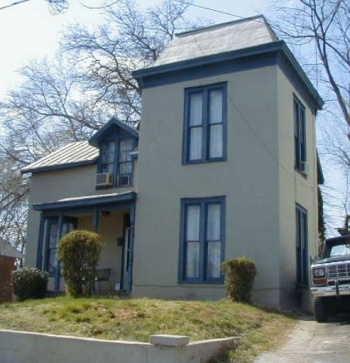 The Benjamin Tonsler House is one of Charlottesville's individually protected properties, meaning any exterior changes or potential demolition would have to be approved by the Board of Architectural Review. The house is located at 327 Sixth Street, SW[1]. The house was once owned by Benjamin Tonsler, for whom Tonsler Park is named. Tonsler was an associate of Booker T. Washington, for whom Washington Park is named.

The structure is within the Fifeville and Tonsler Neighborhoods Historic District. [2] According to the nomination, "the frame house is also notable as it combines architectural elements of the Italianate, Second Empire, and Gothic Revival, all popular Romantic styles of the period, into a unique vernacular adaptation unlike any other in the district." The house was built between 1875 and 1879 and attained its current form as depicted on the 1907 Sanborn Fire Insurance Map.