Benjamin E. Tonsler (1854 – 1917) was an influential local educator at beginning of the twentieth century. Tonsler Park, located in the Fifeville neighborhood, was named in his honor. Between 1895, and his death in 1917, Tonsler became a prominent leader in Charlottesville's African-American community, due in part to the influence of his former Hampton classmate and long-term adviser, Booker T. Washington. Washington (1856 – 1915) called for black progress through education and entrepreneurship, rather than trying to challenge directly the Jim Crow segregation and the disenfranchisement of black voters in the South. 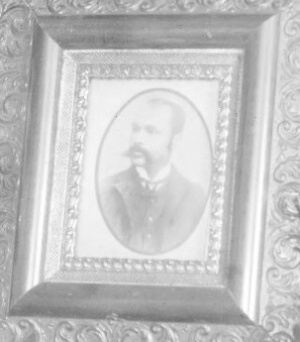 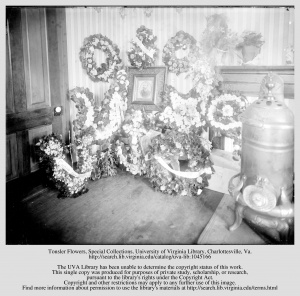 Tonsler was born into slavery[1] on April 2, 1854 near the small community of Earlysville in Albemarle County.

Charlottesville city directory for 1889 list the following under SCHOOLS: The City Public School for colored children is located on 4th St. n.w. B.E. Tonsler, Principal, with a corps of six teachers. The school has about six hundred children in attendance.

Tonsler's approach to education was influenced by his friendship with Booker T. Washington (b. 1856, d. 1915). Both Tonsler and Washington were students at Hampton Normal and Agricultural Institute. This Institution eventually became simply Hampton Institute in 1930 and then Hampton University.

Tonsler was from the last generation of black Americans educators born into slavery. During the post-war Reconstruction era, Virginia adopted a constitution which provided for free public schools, and guaranteed political, civil, and voting rights. After 1889, the conservative white Democratic Party gained power and passed segregationist Jim Crow laws. The Virginia Constitutional Convention of 1901–1902 produced the 1902 Constitution which included a poll tax and other voter registration measures which disenfranchised large numbers of blacks and working-class whites. In October of 1902, Tonsler was a registered voter for the November 4, 1902 election, the first election after Virginia's Constitution of 1902 became law.[4][5]

Tonsler was held in high regard in the community, both white and black. According the March 7, 1917 front-page tribute in the afternoon edition of The Daily Progress, because of “his earnestness and devotion to the upbuilding of his race, he has earned a high place in the estimation of the school authorities of the State.” He was described as “quiet and unassuming, but with a clear perception of the vast field for good which lay before those of his race who are ambitious to rise, he impressed himself on the rising generations under him in a way which won the admiration and esteem of all his white neighbors. It may be justly said without exaggeration that he measured up to the high standard which was set by Booker Washington and men of his stamp.”

Benjamin Tonsler and his family were a part of the "The Four Hundreds Club" -- a group of African-Americans in Charlottesville who were clearly members of the black middle class. After emancipation, a group of African-Americans educated themselves and were able to get jobs that paid well. They had enough money to buy land, and each plot cost $400. Thus, the name Four Hundreds. The Four Hundreds were not a social club that had regular meetings-instead they were certain families who were not only more well-off than the others, but fashioned themselves and were "looked to as leaders" within the African-American community. Members of the Four Hundreds included "teachers, principals, and business owners." Some Four Hundred families included: the Coles, the Bells, the Tonslers, the Inges, and the Jacksons.[6] 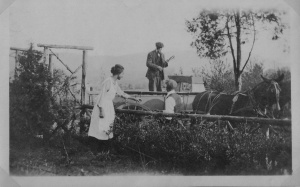 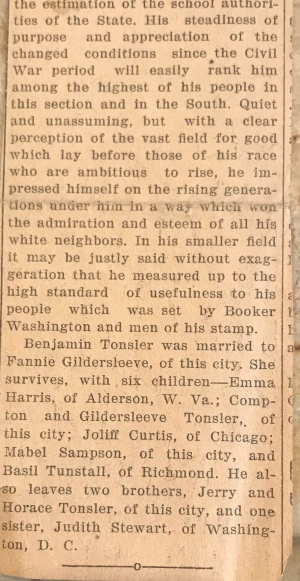 Tonsler died in the afternoon of March 6, 1917 from pneumonia at his home, after an illness of less than a week. Funeral services were to be held in the First Baptist Church (West Main Street), pastor Rev. C. M. Long was to officiate. Internment was at Oakwood Cemetery[8].

The Benjamin Tonsler House located at 327 Sixth Street, SW is one of Charlottesville's Individually Protected Properties[9]

During the late 1800s and early 1900s, pneumonia was the leading cause of death due to infectious disease and the third leading cause of death overall. The majority of deaths during the influenza pandemic of 1918-1919 were not caused by the influenza virus acting alone, report researchers from the National Institute of Allergy and Infectious Diseases (NIAID), part of the National Institutes of Health. Instead, most victims succumbed to bacterial pneumonia following influenza virus infection. [10]