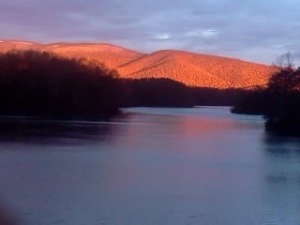 Beaver Creek Reservoir is the public water supply for Crozet. It is maintained separately from the rest of the urban water supply system operated by the Rivanna Water and Sewer Authority.

Planning for the reservoir began in 1960 when the project went before a citizens committee. The Soil Conservation Service (now the Natural Resources Conservation Service) paid for a portion of the dam and the county paid for the rest. The county needed to purchase 136 acres along Beaver Creek. At first the goal was just to store the water for a time when Albemarle County needed more supply. [2] The committee gave its assent on February 2, 1960. [3]

The 104-acre reservoir was completed in 1964 with construction of the Charles Mercer Garnett, Sr. dam. The plaque placed at the dam notes the following about Garnett:

"Named in honor of Charles Mercer Garnett, Sr. Public citizen whose efforts resulted in Albemarle County being the first county to have the County Executive form of government in 1933 and who piloted soil conservation practices in Albemarle County of which this dam is one example."

The plaque shows the members of the Albemarle County Board of Supervisors at the time construction of the dam began in 1959:

the members of the BoS when the dam was completed in 1964: