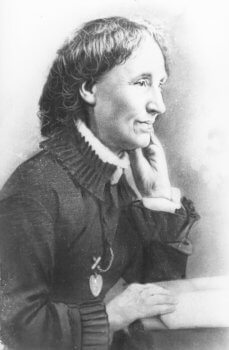 Anna Gardner (1816 - 1901) was a teacher in Freedman’s Schools down the East Coast. Her longest position (after the African School in her hometown of Nantucket, where she held her first formal teaching position) was at the original Jefferson School in Charlottesville, which she named and helped establish.[1]

Gardner was born in Nantucket on January 25, 1816. Her parents, Oliver Cromwell Gardner and Hannah Macy Gardner, were Quakers and abolitionists, and thus active supporters of human rights. In 1822, the Gardners hid Arthur Cooper, a man who had emancipated himself from enslavement in Alexandria, Virginia, and his family from bounty hunters. Mary Cooper, Arthur’s wife, gave birth to her fourth son in the Gardner’s attic.[1]

Gardner was one of approximately eleven children. Nantucket Quakers generally supported equality of the sexes and the empowerment of women, and Gardner was encouraged to expand her mind and horizons with education. She went to the prestigious Quaker Friends Boarding School in Providence, Rhode Island, which she graduated from at the age of thirteen. By fifteen, there is a mention in the local newspaper of her teaching Black children to read and write from her family home. At eighteen, she subscribed to the abolitionist newspaper The Liberator. [2]

While in Nantucket, Gardner was also known to be active in the women’s temperance movement, and to attend lectures for the New England Anti-Slavery Society, of which she was chapter secretary. Through the Society, she met and befriended abolitionist Frederick Douglass, who was on their lecture circuit at the time.

By 1838, Gardner was teaching at the African School, a one-room schoolhouse for Nantucket’s Black residents. She had fifty pupils in one room and taught all levels up to the ninth grade. In 1840, Nantucket refused to integrate their public schools, meaning that only white students could receive a secondary education. Gardner resigned in protest.[1]

After the end of the Civil War, Gardner moved to Charlottesville. She was charged with setting up a new Freedmen's Bureau school as part of Reconstruction efforts by the federal government to redress racial inequities in the South. Gardner set up her school in "Mudwall," also known as Delevan Hotel. Soldiers were still housed in the nearby barracks, and Gardner credits them with protecting her from hostile locals. In addition, dozens of newly emancipated Black families – many of whom would become Gardner’s students – resided in the Mudwall compound. Even before the classroom was ready, she began teaching the adults in her own room.[1]

By the time the classroom was ready, hundreds of free Black people in Charlottesville wanted to be students. She hired and demanded a salary for Isabella Gibbons, who was already literate and had planned for years to open her own freedman’s school. Gardner named her school the “Jefferson School” out of admiration for the ideals he wrote about: liberty and equality. [1]

University of Virginia students frequently disturbed the school and occasionally attempted to intimidate those associated with it. The Ku Klux Klan made several intimidation attempts, including threats.[1]

The original Mudwall building was in a constant state of disrepair. The four members of the teaching staff were able to move into a nearby schoolhouse with at least eight available rooms. The schoolhouse was outside of the city of Charlottesville but between it and the University, directly next to the Orange and Virginia Railroad tracks.[1]

After the fourth school year, a new building for the school was slated to be constructed, funded and overseen by the Virginia Freedmen's Bureau. The building, with two and a half stories, four classrooms, a library, and living space for teachers and a janitor, was finished in January 1870.

At the time, 207 students were enrolled in the day school and 36 enrolled in the “normal” school (which trained teachers). Graduates of the normal school often had a difficult time getting jobs locally, especially in white-owned businesses.[1]

Gardner resigned her position as teacher and principal of the Jefferson School in 1871, after her disapproval and condescension of evangelical traditions created a rift between her and the freedmen she taught, lived, and worked with. Philena Carkin, one of the original four teachers, succeeded her as principal.[1]

Gardner took a teaching position in Elizabeth City, North Carolina in an established freedmen’s normal school. The New England Freedmen’s Aid Society, who had paid her for nearly a decade, suffered from reduced interest and funding shortly after. Her final teaching appointment was at the Jackson School (not named for the president) in Camden, South Carolina in 1873. Gardner and the school faced stronger opposition from white society and the Ku Klux Klan than they did in Charlottesville. Gardner taught the highest grades, and was once again given a salary by the NEFAS. She did not wish to be paid by the state. [1]

Gardner returned to Nantucket in the late 1870s and became more heavily involved in the women’s suffrage movement. She joined the Association for the Advancement of Women, wrote for the Women’s Journal, and spoke at the Fourth Women’s Congress in 1876 in Philadelphia. [2] Nantucket suffragists allied themselves with the American Woman Suffrage Association, which supported suffrage for Black people as well as women, and with that the Fifteenth Amendment.

Gardner authored several works of poetry and a memoir of her time in the South titled Harvest Gleanings. She died on February 18, 1901 from breast cancer.