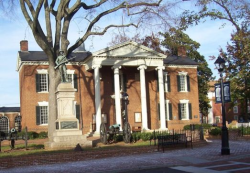 The Albemarle County courts complex is located in downtown Charlottesville and consists of:

The complex, located in Court Square, is on the National Register of Historic Place and is part of the Albemarle and Charlottesville County Courthouse Historic District. The Albemarle County Board of Supervisors is renovating the courts in place rather than relocate them.

The first court in Albemarle County was organized in 1744 and Joshua Frye served as president. In 1761, Dr. Thomas Walker donated 50 acres of land to become the site of a courthouse. The next year, the General Assembly established this site as the town of Charlottesville. [2]

The new courthouse also served as the home of several congregations. Parishioner Thomas Jefferson remarked that the mixing of civic and religious spaces provided a "common temple" for the community. The University of Virginia's Board of Visitors met there until the Rotunda was completed in 1826. [1]

A $9,400 addition designed by William Pratt was completed in 1859 and was flanked with towers designed to emulate the Virginia Military Academy. This look lasted until 1938, when architect Milton Grigg undertook a renovation that removed the stucco from the Pratt design. Other renovations took place in 1964 and 1986. [1]

The courts will be renovated in two phases. In the first, Albemarle and Charlottesville are building a joint General District Court in a section of the historic Levy Opera House. [3]

With population projections showing the need for more court space, Albemarle officials studied two scenarios to address the need for additional capacity. Albemarle County spent many years studying future capacity downtown, but the Board of Supervisors in 2014 signaled a willingness to consider relocating the courts. [4] A September 2012 report had calculated the system needed 94,990 square feet of space. [1] Albemarle Supervisors voted in January 2015 to proceed with a study to relocate the courts downtown. [5] However, Supervisors were briefed on alternatives in April 2016. [6]