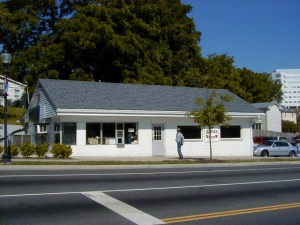 415 Roosevelt Brown Boulevard is at the northwest corner of 9th Street SW and Cherry Avenue. The nondescript one-story cinderblock building was constructed in 1950 for business use. The 5,184 square foot commercial property is within the Fifeville and Tonsler Neighborhoods Historic District. [1]

The current building was constructed in 1950 as the “Kustard Korner” with an address of 415 9th Street NW. The unique spelling of the business name implies that the food establishment sold a type of frozen custard desert. In 2006, the City renamed the portion of the street between Cherry Avenue and West Main Street (formerly known as 9th/10th Connector in the early 2000’s, formerly known as 9th Street SW) to Roosevelt Brown Boulevard.