301 West Main is located at the corner of West Main Street and Ridge/McIntire in Charlottesville. The Marriott Residence Inn is nearing completion.

The site is the former home of Mooney Oldsmobile, a car dealership. City officials agreed on September 17, 2007 to rezone the land in 2007 from the West Main North to the Downtown Corridor zoning. [1] That cleared the way for a 101' foot tall building with a CVS building but that plan fell through. As of 2012, the property is under contract by a management group representing the Marriot hotel chain.[2] The BAR gave its final approval at its meeting on November 20, 2012.

Utility relocation for the new Marriott Residence Inn got underway in October 2013. 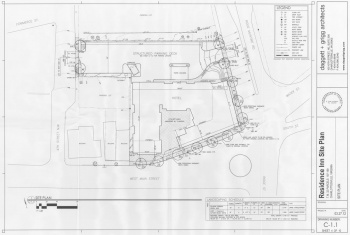 Site Plan for the Marriott Residence Inn as presented to city staff on April 18, 2012 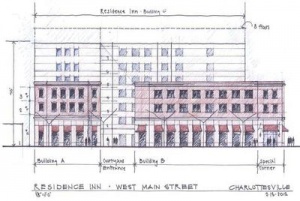 Plans for an eight-story Marriot Residence Inn were shown to Charlottesville's Board of Architectural Review in February 2012. The plans also include a 103-vehicle parking garage.[3] The project received partial approval by the BAR in June 2012. [4] [5]