1105 West Main Street is a contributing structure in the West Main Street Architectural Design Control District. The University of Virginia's Stacey Hall is currently located on the property. 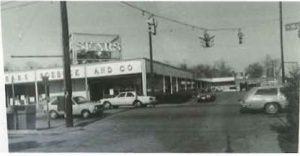 The building at this location was constructed in 1957 to be a Sears Roebuck.

Prior to that, the property was home to a restaurant called The Griddle and a structure known as the Olivier Building. Those structures were demolished in 1957. [1]

The Sears Roebuck structure was a reinforced concrete building clad with brick that was designed by Stevens and Wilkinson, an Atlanta-based architectural firm. The firm was responsible for designing all of Sears' new stores in the south, according to U.Va architectural historian Richard Guy Wilson. To make way for the building, several parcels of land on Wertland Street were converted from residential use to commercial use.

Sears only stayed in the location for just over two decades before moving to Fashion Square Mall.

By 1981, the property had been purchased by the Pepsi Bottling Company, who leased the facilities to the U.Va health facilities office. The building's exteriors were renovated at this time. [1]