From Cvillepedia
(Redirected from 10th and Page)
Jump to: navigation, search

10th & Page is a Charlottesville neighborhood named for a street intersection near the center of the neighborhood.

The 10th and Page neighborhood is one of Charlottesville's most compact neighborhoods, consisting of 83.86 acres[1].[dead link]

A planned historic survey of the neighborhood was delayed in November 2019 after some residents expressed concern about its purpose. A meeting was held on December 5, 2019. [2] [3]

Much of the neighborhood was developed by John West, an emancipated slave who purchased land and subdivided it for African American families in the late 19th and early 20th century. The neighborhood was kept predominantly Black throughout the 20th century due to the work of people like Charles H. Brown who sought to ensure ownership stayed within African American families. [2]

The City worked with the Piedmont Housing Alliance to purchase thirteen single family homes for renovation. Some of these properties have been resold to individual families in the hopes of increasing a family-oriented neighborhood.[when?]

At one point, Schenck's Branch ran openly ran through the neighborhood until a child drowned and it was covered up[1]. 9th Street was at one point called Alfonso Street. 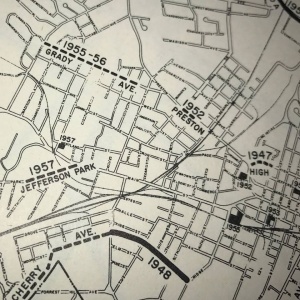 In the spring of 2016, the city of Charlottesville is adjusting the roadway as part of a project funded through the federal Community Development Block Grant program.